"A large, butterfly-like creature that emerges from a small object, possibly a cocoon."
— Description of a Swooping Evil[src]

The Swooping Evil was a blue-and-green winged dark[1] magical beast.[3]

It appeared similar to an extremely large butterfly, but with a wolf-like skull in place of an ordinary head. When it was not flying with its spiked wings, the Swooping Evil shrunk into a green spiny cocoon.[4]

It could be quite dangerous, as it was an encephalophage — it fed on human brains — and its tough green skin had the ability to deflect at least some spells. It secreted venom that, when properly diluted, could be used to erase bad memories.[4]

Newt Scamander brought one to New York in his suitcase in 1926, using it to escape from MACUSA with Tina Goldstein and shield them from Aurors that attacked them.[5]

Newt also used the Swooping Evil to distract Gellert Grindelwald (in disguise as Percival Graves) for a crucial second, allowing Newt to restrain him with a spell.[5]

A vial of its venom was diffused over New York City through a rainstorm created by Frank, Newt's captive Thunderbird, over the city's entire No-Maj population, with the rain water effectively wiping of all their bad memories of magic and therefore preserving the security and secrecy of the magical community.[3]

During the Calamity which affected the wizarding world in the 2010s, Swooping Evil Foundables were trapped with fire Confoundables, which members of the Statute of Secrecy Task Force had to overpower with the Water-Making Spell.[1]

The Harry Potter Wiki has 9 images related to Swooping Evil. 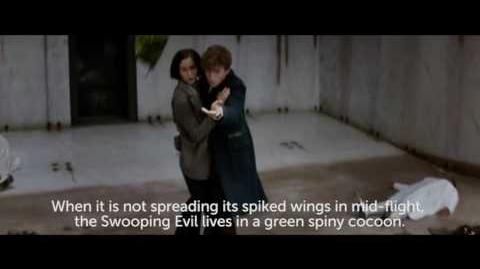 What Is A Swooping Evil?

Deutsch Deutsch Español Français 日本語 Polski Русский
*Disclosure: Some of the links above are affiliate links, meaning, at no additional cost to you, Fandom will earn a commission if you click through and make a purchase. Community content is available under CC-BY-SA unless otherwise noted.
Advertisement