T. M. Riddle's Diary[6] was a blank diary which Tom Riddle transformed into a Horcrux. This event took place in 1943, during Riddle's sixth year at Hogwarts School of Witchcraft and Wizardry. It was the first Horcrux he ever made and was intended to be used as a weapon.

Before Lord Voldemort's first defeat in 1981 the diary was passed to Death Eater, Lucius Malfoy. In secret Malfoy kept the diary, before he slipped it into Ginny Weasley's cauldron of school supplies at Flourish and Blotts in 1992. The diary used its magical influence to possess and force Ginny to re-open the Chamber of Secrets, but it was destroyed by Harry Potter in 1993 with a Basilisk's Fang.

When Tom Marvolo Riddle was in his fifth year at Hogwarts, he achieved his goal of locating Salazar Slytherin's Chamber of Secrets and used his ability to speak Parseltongue to open it. He further used this language ability to order the Chamber's Basilisk to terrorise the school and hunt down the Muggle-born students. Eventually one, a Ravenclaw girl named Myrtle Warren, was killed. Riddle would later use this murder to infuse the journal with a piece of his soul, and transformed it into his first Horcrux.

"I was patient. I wrote back. I was sympathetic, I was kind. Ginny simply loved me... No one's ever understood me like you, Tom... I'm so glad I've got this diary to confide in... It's like a friend I can carry around in my pocket... If I say it myself, Harry, I’ve always been able to charm the people I needed."
—Tom Riddle regarding his manipulation of Ginny Weasley[src]

Some time during the First Wizarding War, Lord Voldemort entrusted the diary to Death Eater, Lucius Malfoy. The plan was to use the diary to reopen the Chamber, but Voldemort fell before that plan came to fruition, although Voldemort never told Lucius that the diary contains a fragment of his soul, instead simply making it appear to be cleverly charmed. However, Malfoy still possessed the diary and, in 1992, he planted it on Ginny Weasley, hoping to kill three birds with one stone by sabotaging Ginny's father, purge the school of Muggle-borns, and eliminate an incriminating Dark artefact. Because Lucius was unaware of the diary is actually a container for his master's soul fragment, he was able to treat it with such light-handedness. When the Weasleys and Harry left to King's Cross Station, Ginny accidentally left the diary behind at the Burrow. Just before they got to the motorway, she remembered the diary and demanded to be allowed to go back and get it. She soon learned how to use the diary to communicate with Tom Riddle, though she was unaware that he was Lord Voldemort, or if he was even real. Ginny wrote all of her deepest feelings and secrets in the diary, including her feelings of infatuation toward Harry Potter.

"When Voldemort discovered that the diary had been mutilated and robbed of all its power, I am told that his anger was terrible to behold."
—Albus Dumbledore regarding the Horcrux diary's destruction[src]

Harry returned to the girls' lavatory and successfully discovered and opened the Chamber of Secrets. He, Ron, and Professor Gilderoy Lockhart made their way into the Chamber. Lockhart, who had no plans to actually fight the Basilisk, attacked the students with Ron's own broken wand, which backfired on him, and Wiped his memory. Harry continued into the Chamber, where he discovered an unconscious Ginny next to Tom Riddle, who was gaining strength and form. Concealing his true nature as a Horcrux, Riddle claimed to be a memory of his younger self, and revealed the truth of his identity and plans to Harry and unleashed the Basilisk. Harry defeated the Basilisk with the assistance of Dumbledore's phoenix, Fawkes and Godric Gryffindor's Sword which appeared from the Sorting Hat. Harry then took one of the Basilisk's fangs and stabbed the diary with it. This successfully destroyed the Horcrux, as basilisk venom was one of the few substances with that ability. When he later explained about the diary's true nature to Dumbledore, the latter was privately concerned, as no mere memory could just possess a girl and eventually take physical form, and he suspected the diary was a Horcrux.

"While the magical container is still intact, the bit of soul inside it can flit in and out of someone if they get too close to the object. I don’t mean holding it for too long…I mean close emotionally. Ginny poured her heart out into that diary, she made herself incredibly vulnerable. You’re in trouble if you get too fond of or dependent on the Horcrux."
—A Horcrux's ability to influence a person[src] 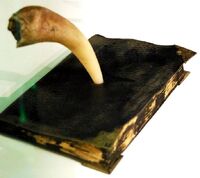 Retrieved from "https://harrypotter.fandom.com/wiki/T._M._Riddle%27s_Diary?oldid=1095487"
*Disclosure: Some of the links above are affiliate links, meaning, at no additional cost to you, Fandom will earn a commission if you click through and make a purchase. Community content is available under CC-BY-SA unless otherwise noted.