I saw in a comment during the game somewhere that his surname is something like Olowje? It said he was really good at flying.—The preceding unsigned comment was added by SiriusLeeNott (talk • contribs).

It is the same in the English version. I tried to take a screencapture of it, but I was unfortunately too slow. SiriusLeeNott (talk) 19:39, April 30, 2018 (UTC)

Is anyone able to remember when this character has his name on display? I'm not even getting "Andre" yet, but I'd like to be prepared why to expect it? Article citing Harry Potter: Hogwarts Mystery honestly isn't enough... Year and chapter would be appreciated. The image helped tremendously. I've just started year 2 and saw this person in my first Transfiguration class; perhaps I'd get to see the reveal, but so far there's no option of clicking on him. --Sammm✦✧(talk) 17:24, April 30, 2018 (UTC)

Um, so did anyone remember their current year and chapter? (still not answered.) Thank you, Rodolphus, for providing the video; however, in it, the Library is available... which in the official released it isn't until 3rd year... Is everyone seeing the name already in their 3rd year? When I was doing the transfiguration class, I think the only dialog I saw was from either Minerva, Rowan, or myself. I'll keep my eyes open though.
--Sammm✦✧(talk) 19:51, April 30, 2018 (UTC)

Okay, so I finally got the name (full name at that!!) However, it was mentioned during the flying class by another student; it is possible this conversation has already happened during my year 1 play and I just didn't pay attention (I didn't read those comments until much much later.) In this case, I have to agree the year and chapter most likely wouldn't matter; I have seen similar comments about Bill and Charlie, just wasn't expecting to get one for a new character. I have yet to have this name associate with the guy in the image used on the article though. Hopefully it will happen soon.--Sammm✦✧(talk) 20:04, May 2, 2018 (UTC)

I feel like most people already played past this part, but if anyone hasn't, or happened to remember, sharing what he said during the Weaving class for flying, before it's the player's turn to try, would be appreciated? I feel like he said something about a Seeker? I could be imagining it, but I really thought he said something significant, but it went too fast (I screenshot everything else though, just missing one dialog.)

Whelp, just so I won't get it throw in my face for not following procedures; can folks agree that it is okay to switch to 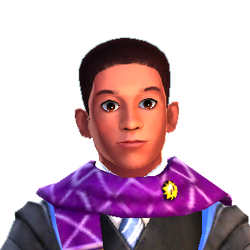 Retrieved from "https://harrypotter.fandom.com/wiki/Talk:Andre_Egwu?oldid=1138208"
Community content is available under CC-BY-SA unless otherwise noted.