Though Ron does say that Scorpius is a pureblood, Daphne and Astoria could still be half-bloods. According to the article here, if all of your grandparents are either pureblood or hal-blood, than you are a pureblood, but one parent isn't. In this case, that would have to be the Greengrasses, since the Malfoys definately qualify as "pureblooded" 68.49.1.146 21:09, April 21, 2011 (UTC) Leila</p>

Rowling has stated that to people like the Malfoys and the Blacks, to whom these distinctions matter, any traceable muggle ancestry automatically disqualifies one from being pure-blood. - Nick O'Demus 05:44, April 22, 2011 (UTC)
The article is wrong then, because "pureblood" means you have no muggle blood in you. If Astoria had been a half-blood, then her son would have to be a half-blood, because he has some muggle blood. Daphne and Astoria have to be purebloods. - Anonymous 19:24, May 5, 2011

How do we know if this is Daphne Greengrass? This picture without evidence is an assumption and thus is canon and incorrect. --Vana Bloom 03:48, August 9, 2011 (UTC)

She is mentioned on Pottermore. --Danniesen

There is a mention of Queenie Greengrass, not Daphne. But it could be that the name later is changed. But about this there is no information. Harry granger 07:37, August 26, 2011 (UTC)

Could it be that the witch in this picture is actually Daphne? 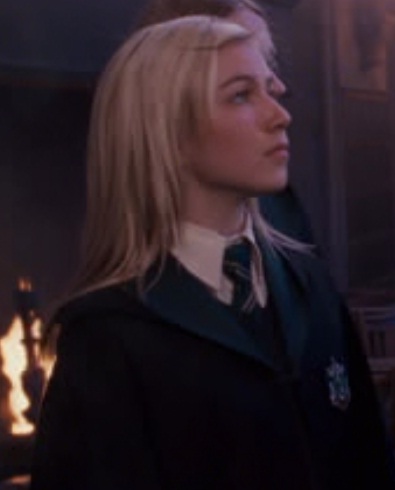 Okay, but I don't see your point. The same could be said of another picture of some other unidentified girl wearing Slytherin robes. But unless we have proof that the picture is of Daphne, it can't be used on the page. ProfessorTofty (talk) 18:20, August 13, 2013 (UTC)

Well, in that case, the answer is simply we don't know. It might be Daphne, then again, it might not be, but there's just not enough evidence either way to say. ProfessorTofty (talk) 20:13, August 14, 2013 (UTC)

In my opinion, the fact of "there is or there is not proof" that some picture is determined character, isn't reason enough to post it in the text. Someone posted another image (a better one, in my opinion) of this girl. The address is: http://harrypotter.wikia.com/wiki/File:222px-Daphne-greengrass-harry-potter-wiki-i4.jpg Andre G. Dias (talk) 09:06, March 28, 2014 (Brazil)

Yes it is Daphne because she is a part of Pansy's friend group and Pansy is behind her. —The preceding unsigned comment was added by Slytherclaw000ThunderClan (talk • contribs) 23:51, March 8, 2017‎.

There's no evidence that the actress in those pictures is supposed to be portraying Daphne Greengrass. The only reference to Daphne in the books is a passing reference to her name being called out along with those of several other students during O.W.L. testing in Order of the Phoenix, Chapter 31. We know she's a Slytherin from J. K. Rowling's hand-drawn class list of students in Harry's year that was featured in Harry Potter and Me. We don't know if she was friends with Pansy, let alone a member of her clique. ★ Starstuff (Owl me!) 00:10, March 9, 2017 (UTC)

Retrieved from "https://harrypotter.fandom.com/wiki/Talk:Daphne_Greengrass?oldid=1052308"
*Disclosure: Some of the links above are affiliate links, meaning, at no additional cost to you, Fandom will earn a commission if you click through and make a purchase. Community content is available under CC-BY-SA unless otherwise noted.