Back to page
View source

Doesn't her pressence in the F Forest when Harry was "killed" indicate she's a Death Eater? Mafalda Hopkirk 16:47, 27 December 2007 (UTC)

Fenrir Greyback was also present in the Forest with the Death eaters - as well as others, namely the giants - none of whom were death eaters. Therefore Being in the forest at the time wouldn't automatically make her a death eater. I seem to recall somewhere seeing it said specifically that she isn't a death eater though. I think her presence was more out of concern for her son, than her being a death eater.HPguru 12:27, 8 September 2008 (UTC)

JKR revealed in a webchat shortly after the release of DH that although Narcissa shared her husband's views up to the point Voldemort threatened Draco, she never took the Dark Mark, and thus was never a fully-fledged member of the Death Eaters. ★ Starstuff (Owl me!) 00:31, 21 January 2009 (UTC)

Who was the actress who played N Malfoy in the scene at the Quidditch World Cup? Mafalda Hopkirk 16:47, 27 December 2007 (UTC)

Narcissa was supposed to have long, very blonde hair. The actress has kinda shortish, black-blonde hair. What is so hard about dying your hair blonde?—The preceding unsigned comment was added by Tonksie (talk • contribs) 23:18, 20 January 2009.

I Think She Should Be A F/A, Because The Fact That She Is A Newly Main Character To The Series. Need More Pictures Of Her Though......

This is just a quick question

Does anyone know if Narcissa and Andromeda ever reconciled after the war? —The preceding unsigned comment was added by Jhill2456 (talk • contribs) 23:53, 10 May 2009.

It was nver confirmed, but possible, since Bellatrix and all the people preventing Narcissa from reconciling with Andromeda are dead or in Azkaban. HarryPotterRules1 03:20, February 24, 2012 (UTC)

In Gof, Dobby refers to his former Masters as Dark Wizards. Should Cissy have the Dark Wizard infobox? Not the Death Eater one.) I can´t remember any scene where she performs Dark Magic herself, though.--Rodolphus 14:27, April 7, 2010 (UTC)

Though she isn't seen enough in the book to compile a good list of her magical strengths, her ability to tell a lie unnoticed by Lord Voldemort points to a talent in Occlumency, which she shared with Draco. Mr Norrell 17:14, May 18, 2010 (UTC)

I really think she should have some sort of power/abilities list, There are certain facts that point towards her having some sort of power. Shes married to a death eater, she is able to stand up to Lord Voldemort without her mind being breeched, she seemed fairly familiar with the unbreakable vow, shes a "half-death eater" as far as i'm concerned. I'm not going to make the section myself because if I do it'll probably get removed. Salazar Slitheren 00:07, June 28, 2010 (UTC)

I saw on here that Narcissa Malfoy became the DADA teacher for Hogwarts. I don't remember Rowling ever saying that. If that is true where is this information located.

Should Apparition be added to Narcissa's skills and abilities?

It's proven in HBP In Spinner's End. Her and Bellatrix apparate to the river bank.

I thought that a dark witch/wizard was a person who studied or practiced the Dark-arts. I also thought that they had to be given the dark-mark to officially be considered a dark-witch or wizard. As Narcissa was not given the dark-mark and considering she never practiced the Dark-arts (atleast as far as I remember) , It would seem that she was never OFFICIALLY considered a dark-witch. She "merely" supported what her family viewed in their pure-blood prejudice, And she was indirectly helping the death-eaters. J.K Rowling even said that she was never considered a death eater [1] (Search Narcissa). What's more, She defected from Voldemort anyway, Therefore even if she was considered a dark-witch, She would be no-more. AznPride112 05:59, September 19, 2011 (UTC)

Narcissa came from a very dark family; her aunt and uncle, Walburga and Orion, supported Voldemort, and many of her family - her cousin, sister, husband, son and both brothers-in-law, namely Rodolphus and Rabastan Lestrange - were Death Eaters; Narcissa comes from a VERY dark family. Very dark. HarryPotterRules1 03:26, February 24, 2012 (UTC)

Do any of you think that Narcissa makes a possible appearance in the film Goblet of fire... I know i do

Narcissa took necessary measures to protect her family, including lying to Voldemort about Harry Potter being dead during the Battle of Hogwarts, an act which saved the Malfoys from serving time in Azkaban following the Dark Lord's defeat. What does it mean? According to the books, Narcissa wasn't a Death Eater & she hadn't committed any crimes. Why would they imprison her? 89.222.240.149 17:40, August 23, 2012 (UTC)

They were still followers of Lord Voldermort and they did go with all the other Death Eaters to participate in the battle. Rainbow Shifter (talk) 17:01, August 24, 2012 (UTC)

People get imprisoned for crimes, not for their opinions or being around criminals. RangerR (talk) 18:02, September 15, 2012 (UTC)

It's true, you don't get imprisoned for your opinion or being around criminals, but when Narcissa first had "arrested" Harry, Hermione, Ron and others for Lord Voldemort that would have been a crime and for that she could have been arrested. Lucius Malfoy had fought more times for Voldemort and was a Death Eater as was his son. Lucius Malfoy also could have been arrested, Draco probably not, but Lucius - YES. That they were not arrested was because of their defection at the end and Narcissa's life rescue for Harry Potter.  Harry granger   Talk   contribs 17:36, December 1, 2012 (UTC) 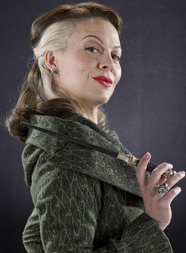 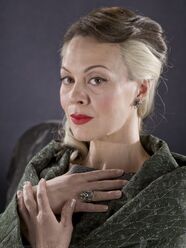 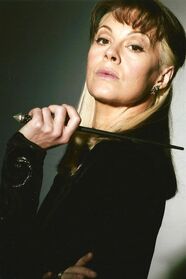 Image 2. Narcissa with her wand. 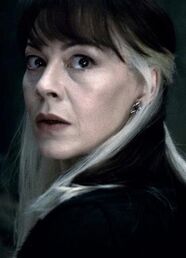 Image 3. A close-up of Narcissa. 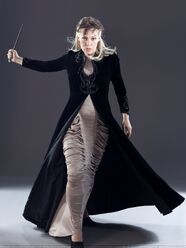 I do agree the first one is best (and has been voted best) so I have changed it back, but if yu prefer the third picture or believe it is the "better picture" please change it back, I do believe the better quality picture should be used before most recent, same goes for Lucius Malfoy. Thanks

*Disclosure: Some of the links above are affiliate links, meaning, at no additional cost to you, Fandom will earn a commission if you click through and make a purchase. Community content is available under CC-BY-SA unless otherwise noted.
Advertisement
Follow on IG TikTok Join Fan Lab