Since this person is only referred to as "Nott" in the books, I think "Mr. Nott" is inappropriate. If his first name is unknown, that could be stated, but as far as i know he is never referred to as Mr. Nott. Mafalda Hopkirk 12:43, 18 January 2008 (UTC)

Why is that photograph here? I didn't know Nott was Voldemort's classmate. That photo is also on the page of Mulciber. I think they were mentioned as being the Death Eaters who travelled at Hogsmeade to tell Riddle "good luck". I'll remove it.User:Quirinus Quirrell

The photo you added to not Nott but Unidentified Female Voldemort's return.Note that no pointy hat, but the hood.

Pardon my asking, but why is there a large black blob on the right side of the photo, between his mask and the hood? Is it perhaps just me eyes? Hunniebunn (talk) 23:40, September 30, 2012 (UTC)

I've uploaded an image, see below: 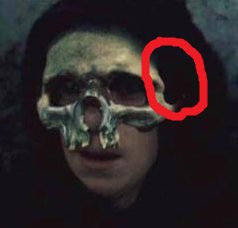 You're right, I can see it now. I don't know, it almost seems as if someone was trying to cover up a watermark or something. We should see if we can get a better image-- that one's not very high resolution anyway. ProfessorTofty (talk) 04:59, March 8, 2013 (UTC)

I removed (will remove the minute I finish this post) the image from the article, so feel free to bring it back if you want. I just don't see any point in a mask with black blobs on it being used as an image. Hunnie Bunn! 12:12, March 8, 2013 (UTC)

Why this page say this Nott is Theodore Nott's father? The Nott that in original deatheater seems too old for Theodore's father.

JKR revealed it on her official website (an archived copy of the original page can be viewed here). She described Theodore's father as a "very elderly widower and Death Eater" and confirmed he's the same Nott who gets hurt in OotP. ★ Starstuff (Owl me!) 03:02, February 26, 2014 (UTC)

Retrieved from "https://harrypotter.fandom.com/wiki/Talk:Nott?oldid=835730"
*Disclosure: Some of the links above are affiliate links, meaning, at no additional cost to you, Fandom will earn a commission if you click through and make a purchase. Community content is available under CC-BY-SA unless otherwise noted.