Harry and Ron did not have to change clothes while taking the potion because they were already wearing Slytherin robes.Morgoth14 01:35, 7 March 2008 (UTC)

"This is the most complicated potion I've ever seen," said Hermione, as they scanned the recipe. "Lacewing flies, leeches, fluxweed and knotgrass," she murmured, running her finger down the list of ingredients. "Well, they're easy enough, they're in the student store-cupboard, we can help ourselves. Oooh, look, powdered horn of a Bicorn – don't know where we're going to get that... Shredded skin of a Boomslang — that'll be tricky, too — and of course a bit of whoever we want to change into."

Under our Canon Policy, things from the movies are considered canonical, as long as they're not directly contradicted by the books or JKR herself. Since the ingredients given in Chamber of Secrets, Chapter 10, are not provided in the form of a direct quotation of the text of Most Potente Potions, it's possible that Hermione simply skimmed the listed printed in the book and left out some ingredients when she spoke.

Personally, I think the extra ingredients are purely creative license on the filmmakers' part, and that they didn't realize the lethal cocktail they'd created. Sal ammoniac, however, seems to be irritant rather than outright toxic, and is used to flavour licorice candies and vodka in some countries. ★ Starstuff (Owl me!) 23:11, 14 August 2009 (UTC)

First of all, it says that the effects last for an hour regardless of the dosage, but in book 7 just before the wedding it is stated that Harry is given a large dose of Polyjuice potion, and there is no mention at all the rest of the day of him needing to keep taking more. Also, it says that continual dosing can draw out the effects indefinitely, but how do we know this? Crouch/Moody was always drinking out of his flask, which contains the polyjuice potion, so how exactly have the effects been drawn out? --BachLynn23 23:56, July 21, 2010 (UTC)

I was just watching the Chamber of Secrets film, and noticed that the page of directions for creating the Polyjuice Potion says something about putting some ingredient in urine. I uploaded an image. If you look at the bottom, you can see what I'm talking about. --Parodist 23:40, September 19, 2009 (UTC) 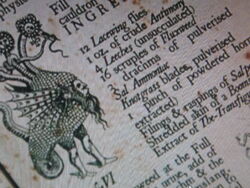 Man, that is one nasty potion! Explains Hermione's wretched face when she looks at it. Unless it is just a note like, stir it until it smells like Urine... otherwise, I think the film writers were having fun with it. Kriuteon 04:08, April 19, 2010 (UTC)

I always thought the polyjuice potion was rare and you need specific ingredients. However, in the later part of the series, they use it constanty. Where did they get the ingredients from?--Qim1 21:55, March 19, 2010 (UTC)

Moody kept a large supply of it which Hermione liberated after his death. --JKoch

Hello. So sorry to ask, but where is that image from? It is from a reliable source? Because to me it seems like a fanmade prop. The differences are small but noticeable: The font is a bit different and the text on the bottom of the page seems to differ from the one shown on the film (i.e. the last word of the second line is "the" on the "prop", whereas on the film is "of"). --  Seth Cooper  owl post! 23:30, April 14, 2010 (UTC) 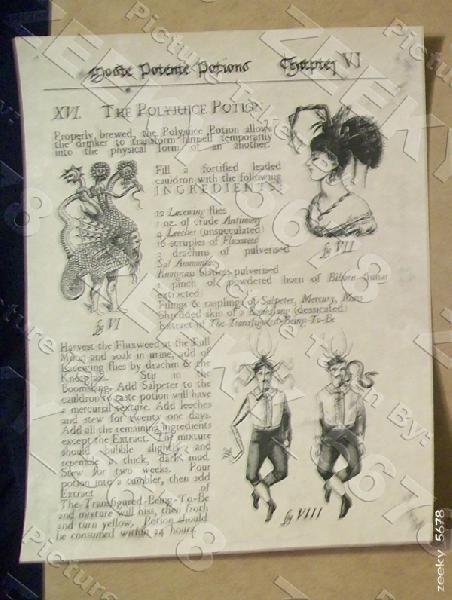 When Harry and Ron take the polyjuice to turn into Crabbe and Goyle, Harry puts his glasses back on because he still has poor vision. In the first part of the 7th movie when everyone uses it to turn into Harry they all inherit Harry's poor eyesight... Does the potion effect eyesight or characteristics such as that or do you keep your own?

Corrected the Battle of the Seven Potters section to battle over Little Whinging M4rius 17:19, August 25, 2011 (UTC)

Can someone find out what color should the potion ingredients from Ron.

It seems at some point in the article's history, there was a full list of ingredients on the page, including a lot of stuff that was only ever in the films or the games, such as Mercury and Mars, Sal Ammoniac and even urine. All of this has since been removed, though some of it remains in Behind the scenes. Are we even considering these ingredients canon, given that they're not in the recipe we've deemed canon for the page and, if not, should we also remove their being ingredients of the Polyjuice Potion from the main sections of their respective pages and shunt it to Behind the scenes? ProfessorTofty (talk) 05:17, December 31, 2012 (UTC)

I'm certainly for that. The highest level canon we have for a recipe doesn't include any of this other stuff, which means that canonically, it isn't part of the recipe. Thus, Behind the scenes. ProfessorTofty (talk) 05:35, December 31, 2012 (UTC)

Behind the scenes on the pages for the respective ingredients. Right now, many of those ingredients pages simply say in their main section that they're a part of the Polyjuice Potion, as if that were canon. ProfessorTofty (talk) 02:41, January 3, 2013 (UTC)

I just read that, on January 7, 1995, Harry assumed the identity of Lord Voldemort (4th book)

The reference says 4th book, but doesn't say the name/number of chapter.

Pretty sure that didn't happen. The only time he ever assumed Voldemort's identity is in that THING they call Cursed Child and I'm pretty sure that wasn't Polyjuice. That wasn't out back then either. So, nope. Pauldarklord (talk) 14:37, November 20, 2018 (UTC)

So what happens if a metamorphmagus drinks polyjuice? Or has this never been described? Seems possible that it could easily either change the MMM's default form making maintaining a different form easier, lock them into the potion-keyed form temporary preventing their normal shapeshifting, or even have no effect at all.... but that's speculation unless someone knows where something more concrete is located. 71.219.146.117 07:51, May 14, 2013 (UTC)

Designed for human use only

I've removed/changed some sentences that seem to be derived from the quote that is now at the top of the "Effects" section. Note what happens there: somebody who looks like Rubeus Hagrid wonders why he doesn't have to be checked. Remus Lupin then says that it would not be possible for an impostor to assume Hagrid's form. This means that it is not possible to use Polyjuice Potion to assume a half-giant's form. But this does not mean that a half-giant could not assume human form. We need more canon evidence than that quote to make that claim. Luna Scamander (talk) 13:46, October 28, 2014 (UTC)

Retrieved from "https://harrypotter.fandom.com/wiki/Talk:Polyjuice_Potion?oldid=1301518"
*Disclosure: Some of the links above are affiliate links, meaning, at no additional cost to you, Fandom will earn a commission if you click through and make a purchase. Community content is available under CC-BY-SA unless otherwise noted.