Salazar Slytherin was one of the first recorded Parselmouths?

how can he be that if Herpo the Foul was one too, and he lived in Ancient Greece, while Salazar Slytherin lived after that time?Faustfan 20:12, 2 July 2009 (UTC)

Could it be possible to create an article listing descendants of Salazar Slytherin? As the family line is vastly complicated. Notdoppler 23:46, September 25th 2009 (UTC)

Wait if Harry Potter is related to Ignotis Peverell or however you spell it does that mean he is releted to Voldermort and Salazar. —The preceding unsigned comment was added by Scar34 (talk • contribs).

To Voldemort, yes, through the Peverell bloodline, but most likely not descended from Slytherin. In Chamber of Secrets, it's established Harry is not the "Heir of Slytherin", as he has no control over the Basilisk. It's likely that Salazar Slytherin's bloodline and Cadmus Peverell's simply mixed at some point in the Gaunt's ancestors. - Nick O'Demus 12:41, December 5, 2009 (UTC)

I've always wondered if Slytherin is much different the his heir, Tom Riddle. I think so because During Slytherin's time Wizards were suffering much persecution and Slytherin wanted to avoid Muggle-borns because of fear they turn on the other wizards. Ztyran

You're right. You could say that Slytherin's mistrust of muggle-borns was quite understandable, given the persecution by muggles against wizards. Jayden Matthews 17:53, December 27, 2009 (UTC)

"You all know, of course, that Hogwarts was founded over a thousand years ago - the precise date is uncertain - by the four greatest witches and wizards of the age. They built this castle together, far from prying Muggle eyes, for it was an age when magic was feared by common people, and witches and wizards suffered much persecution."

There has been some dispute over the picture in the infobox, so I am putting the matter to a vote.

Normal Voting policy applies. The vote will remain open for one week, closing at 13:30 (wiki time) on January 18th. 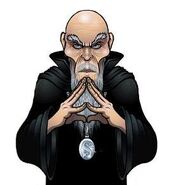 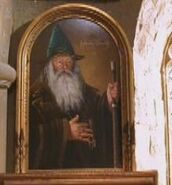 In the box at the end, it said that Horace Slughorn was the HoH for Slytherin after him (eventually). Is there a source that he was the HoH when he was teacher during the Riddle-Era? -- Ratneer Owl Me! 22:14, January 24, 2010 (UTC)

Salazar slytherin is related to Harry Potter, as is Voldemort

Well since Marvolo Gaunt stated that they were decendants of the Peverells and Salazar is a known relaive of the Gaunts and Voldemort the Peverells are therefore descendants of Salazar Slytherin. As, Ignotus Peverell is a descendant of Salazar and is related to the potters as he is there ancestor. Harry Potter is distantly related to Salazar Slytherin as his ancestor meaning he and Voldemort are distant cousins. So, he is related to the Weasley's and everything.

The Peverells are ancestors of Salazar Slytherin. Voldemort is related to Cadmus Peverell. JKR has specifically said Harry isn't related to Slytherin. Slytherin is a distant cousin (at least) of Harry.--L.V.K.T.V.J.

(Send an owl!) 03:53, February 27, 2010 (UTC)
Actually all that is given is that Gaunts claim ancestry from both the Slytherin and the Peverell line. This does not mean that Harry, as a descendent of the Peverells is related to the Slytherins, if, as I assume, that the lines (as is common among pureblood lines) intermarried at some point. Meaning that although Harry is related to the Gaunts, he shares no common ancestor with (and thus is not related to) with Salazar Slytherin

I just thought that in Hogwarts those 4 people must have taught subjects what do u think SLytherin would teach, he might teach D.A.D.A (take away the first D.A, like the death eaters possibly)Philered WAS HERE! PEACE!

Well, actually he will teach his own specific students everything, pretty much.--L.V.K.T.V.J.

According to this site, JKR has confirmed that none of the founders was headmaster. Does this make the Portrait non-canon?--Rodolphus 15:01, April 5, 2010 (UTC)

Harry granger 20:26, April 5, 2010 (UTC) The picture of Salazar Slytherin in the DVD hangs really in Dumbledore's office. But when you look at the pictures of "The Wizarding World of Harry Potter" it seems these pictures hang in the stair entrance. And when you look between the pictures of Godric Gryffindor and Helga Hufflepuff there is a picture that looks very similar to that of Salazar Slytherin from the DVD. So it might be really Salazar, because it hangs like the others in the stair entrance.

Harry granger 17:34, April 15, 2010 (UTC) Hi, I found two sources for costumes of the founders from the Wizarding World of Harry Potter, and also two clear portraits of Helga Hufflepuff and Salazar Slytherin. Perhaps they are better than the now used?!? source:

When I looked on the image CandyandBeverages.jpg (source here: Honeydukes_(The_Wizarding_World_of_Harry_Potter)) I saw a chocolate frog card of Salazar Slytherin from the actor from The Wizarding World of Harry Potter in this picture. Perhaps it would fit well in the site of Salazar Slytherin. What do you think? Harry granger 17:50, June 7, 2010 (UTC)

Salazar Slytherin was Irish/Came from Ireland?

Godric was from Godric’s Hollow in England, Rowena is from glen which suggests Scotland, Helga is from valley broad which suggests the Welsh Valleys. Which leaves Salazar and one of the four Kingdoms of the British Isles: Ireland. Also fens are water-logged places with loads of peat which is pretty much all of Ireland.

St Patrick could have been a muggle guy who attacked the witches/wizards of Ireland and tried to drive them away, for the church. Which would explain why Salazar was not fond of muggles/muggle-borns.

Although his name is Portuguese, Ireland and the Iberian penninsula have always had a close relationship and his family could have came from there. Or via the Normans through Sicily/England.

Also it’d explain the Basilisk as part of a last line of Hogwarts defence against angry bible-bashing muggles intent on destroying it, but got used by evil Tom Riddle to kill muggle-borns as well.

Erm, for the Etymology section, I think the word sly could also refer to cunningness, a trait of most Slytherins, as sly is a synonym of cunning. Also, could someone put a period at the end of the last sentence of the Etymology section as well? Thanks. Windrider116 04:15, May 22, 2011 (UTC)

As the Gaunts and Tom Riddle are descendents of Salazar, it is surely certain he had at least one child. Could this be added under family information? Lysander Scamander 21:29, June 17, 2012 (UTC)

I'm sorry but when has that ever been mentioned as the reason why Slytherin mistrusted muggle-borns? —The preceding unsigned comment was added by Anonymius (talk • contribs).

Salazar being a pureblood

I'm sorry but what evidence is there of this?  just because he didn't like muggle borns doesn't necessarily mean he's pureblood!  Look at Voldemort and Snape! —The preceding unsigned comment was added by Anonymius (talk • contribs).

The Gaunts, direct descendants of Slytherin, were pure-bloods, so Slytherin himself also was.--Rodolphus (talk) 17:30, March 1, 2013 (UTC)

Just because the gaunts were purebloods doesn't mean Slytherin was.  A pureblood is any wizard who's parentage is at least two generations back wizard, and just because Marvolo stated that his family has been for centuries 'wizards all' doesn't necessarily mean that Slytherin may not have had some muggle blood. (Anonymius (talk) 18:18, March 3, 2013 (UTC))

Who plays Slytherin in the main pic? —The preceding unsigned comment was added by RichardOfYorkGaveBattleInVain (talk • contribs).

Just came to think - it was the Irish branch of the family, and a wand is such a personal thing compared to a locket, whatever its historical significance, so I just wonder if anyone else agree that it is more likely that the Irish branch of the House of Gaunt to reside in the area from which their ancestor came than the British one? Ninclow (talk) 08:29, December 3, 2017 (UTC)

I know that Slytherin was said to have originally used the Chamber of Secrets to teach his students less than irreproachable magic. Not to mention the fact he later used it to store away a very powerful and very dangerous dark magical creature. While he did practice (and almost definitely taught) more of the Dark Arts than his fellow founders would have liked, does that actually make him a dark wizard through and through? (Master Shannara (talk) 08:23, September 10, 2019 (UTC))

Yes. He created a basilisk. Doing so is an inherently evil act, as the basilisk can only deliberately be created by wizards. In other words, he created a weapon to kill others, which was his intention and succeeded in doing (killing Muggle-born students intentionally). Using magic for wanton murder is more than a qualifier for him being a dark wizard.

Retrieved from "https://harrypotter.fandom.com/wiki/Talk:Salazar_Slytherin?oldid=1261071"
*Disclosure: Some of the links above are affiliate links, meaning, at no additional cost to you, Fandom will earn a commission if you click through and make a purchase. Community content is available under CC-BY-SA unless otherwise noted.