Wow, I hadn't noticed that. Is that an image from the actual movie or not? If it is, its one of the many mistakes the film-makers have made. However, we could just see it as a non-canonical image. Joeworthy 15:45, June 16, 2010 (UTC)

Thanks, Seth. However, the image is real and it appears in the actual film (OotP, Umbridge & Trelawney scene), so I was really confused when I saw it. As Joeworthy has said, all makes sense now!
--El Profeta Vespertino 19:06, June 16, 2010 (UTC)

But, where is this building? 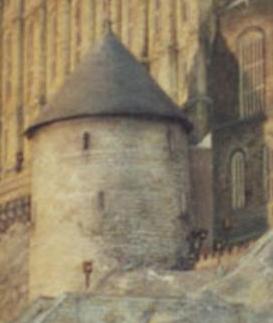 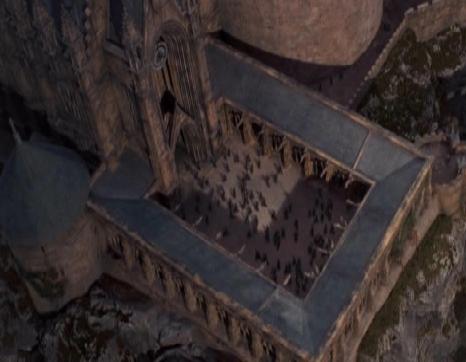 I think it could be the angle of the image meaning we don't see it, or it could be just another mistake on the film-makers behalf. Very weird. Joeworthy 20:13, June 27, 2010 (UTC)

The courtyard is non-canon. J.K. Rowling describes the approach to the castle as a "sloping lawn that leads all the way to the front steps". There is no courtyard, and no viaduct.—The preceding unsigned comment was added by 86.163.2.174 (talk • contribs).

It mustn't be deleted. The existance of the courtyard is canon. What it is non-canon is being outside the Entrance Hall.--

But it IS outside the Entrance Hall! You can't just pretend that it's somewhere else! It contradicts Rowling's description of the castle and should be deleted!—The preceding unsigned comment was added by 86.163.2.174 (talk • contribs).

First of all, there's no need to delete non-canon articles (see Burning of the Burrow). Secondly, Luna Lovegood using Episkey is canon. However, it is non-canon that it uses with Harry Potter at the Entrance Gates. The same occurs with the Entrance Courtyard. It is part of the Hogwarts Castle, despite its location being somewhere else.--

Luna using Episkey doesn't contradict canon, this DOES! The courtyard is clearly conected to the Entrance Hall so how the hell do you intend to propose that it is actually somewhere else? Furthemore there is loads of BS info in this article, like Trelawney being sacked, and Fred and George fleeing Hogwarts. Both events took place in the Entrance Hall. There is NO POINT in keeping this article!!! —The preceding unsigned comment was added by 86.163.2.174 (talk • contribs).

Please, stop shouting. Luna isn't supposed to be healing Harry, as Tonks does in the books. However, you're right that Trelawney and the twins' info should be in the BTS section, as it DOES contradict the book. But we DO USE the Daniel Radcliffe as Harry Potter image, despite Harry having green eyes and Radcliffe blue eyes. Ah! Please, sign your comments --

Why did you tell me to stop shouting only to start doing it yourself? If such images are non canon then modify them to make his eyes green. Or replace them with ones from the video game where his eyes are green. Or better yet the one from JK's website. And no, I won't.—The preceding unsigned comment was added by 86.163.2.174 (talk • contribs).

I've been looking through the Deathly Hallows: Part 2 game files, and in some of them, the courtyard is referred to as "Viaduct Courtyard" (i.e. "hc_viaduct_courtyrd_complete_anim"). This, along with the fact that the courtyard is never mentioned to be outside the Entrance Hall in the main article, would make the article canon, right? --  Seth Cooper  owl post! 18:25, July 21, 2011 (UTC)

Are we certain the opening scene of Deathly Hallows: Part 2 is set in May of 1998? My first assumption upon watching the film was that this was the arrival of the students on the first of September, as they are coming from the Viaduct (which in Deathly Hallows: Part 2 leads to outside the school grounds). Besides, it couldn't have been in May, as the Gringotts Break-In takes place on 1 May, and this scene was definitely some time before that (so the latest possible time, anyway, would be April). --  Seth Cooper  owl post! 00:17, August 16, 2011 (UTC)

The Cloister in Chamber of Secrets?

"In the film adaptation of Harry Potter and the Chamber of Secrets the cloister walls can be seen."

I'd like to point out that while it says in the trivia section that the courtyard gets bigger in every film, it really doesn't. The only thing changing in that compilation picture is the angle of the camera. I move that this comment in that trivia/behind the scenes section be removed, but keep the picture, cause it provides nice perspectives of the courtyard. Venus rover (talk) 00:41, July 7, 2015 (UTC)

Retrieved from "https://harrypotter.fandom.com/wiki/Talk:Viaduct_Courtyard?oldid=922049"
*Disclosure: Some of the links above are affiliate links, meaning, at no additional cost to you, Fandom will earn a commission if you click through and make a purchase. Community content is available under CC-BY-SA unless otherwise noted.