Newton Scamander (owner)
Teddy[2] was a Niffler owned by Newton Scamander. He accompanied Newt as he researched information for his book Fantastic Beasts and Where to Find Them: while travelling with Newt, Teddy visited New York in 1926 and Paris in 1927.

Teddy was born sometime before December 1926 and was rescued by Newt Scamander, and consequently placed inside of his magically-expanded suitcase full of magical beasts.[3]

In December of 1926 during Newt's trip to New York, Teddy escaped to steal a beggar's coin. He then sneaked into the Steen National Bank and caused mass chaos as he attempted to secure valuables and treasure. He eventually found his way into the vaults, where he was captured by Newt.[3]

When Jacob Kowalski accidentally swapped his and Newt's cases, Teddy was taken to the former's apartment. When Kowalski opened the case, he accidentally released a selection of Newt's creatures, including Teddy, who hid behind a photo of Kowalski's grandmother to avoid being discovered.[3]

Teddy eventually found his way to a downtown jewellery store where he attempted to evade Newt, the two of them causing massive amounts of property damage in the meantime. However, he was eventually captured again and placed back inside of the case.[3]

In September of 1927, Teddy was taken to Paris by Newt in the latter's attempt to find Tina Goldstein and Credence Barebone. He was set on the ground of Place Cachée to sniff out Tina's scent and footprints. He soon found the footprints and was put back into the case, after Newt saw a man and chased after his feather tracking him down.[4]

Teddy then snuck out of Newt's case in the Lestrange Family Mausoleum where he secretly secured Gellert Grindelwald's vial of his and Albus Dumbledore's blood from a long-ago blood pact. When Grindelwald attacked a group of Aurors with black fire, one of Teddy's front paws was injured, causing him to walk with a painful limp.[5] He was most likely healed as he could walk normally later on.[6]

As Newt took his suitcase to Hogwarts to meet with Albus Dumbledore, he took out the vial, and when Dumbledore enquired as to how he got it, he showed him Teddy. Newt then carefully set Teddy down and walked across the Viaduct with Albus Dumbledore to the Hogwarts Castle. Albus asked Newt if Teddy would like a cup of tea, but Newt replied saying he'll like a milk 'but hide the teaspoons'.[1]

Like most Nifflers, Teddy had tan skin, black fur, a long snout, and partially-webbed paws. Some of the hair on his head was tinged with grey, perhaps a symbol of old age. He also had a small pouch on his belly that could fit much more than it seemed through use of natural magic similar to that of the Undetectable Extension Charm. Teddy was described as looking like a cross between a mole and a platypus.

Teddy was incredibly intelligent, and mischievous as well. He was able to recognise when he disobeyed Newt, yet continued to do it anyway. He also displayed recognition of the consequences of his actions, showing this when he shared an uneasy glance with Newt after the two crashed into the jewellery store's window.[3]

However, he later developed a gentler and more respectful personality, most notable when he stole Grindelwald's vial of blood for Newt, and when he was released in a Paris square and did not run off or steal from anyone other than sneaking a couple golden items from a shop front while Newt was talking with Jacob.[7]

The two often competed for dominance during Teddy's attempts at freedom. Teddy recognised Newt's authority yet continued to run amok and steal from others. However, the duo soon developed a closer relationship as Newt trusted Teddy enough to set free for short periods of time in a foreign city, and in turn Teddy was able to procure Grindelwald's blood vial.[3][7]

Teddy was never said or shown to cause any harm to other beasts or interfere with their lives. Newt apparently trusted Teddy enough to let him wander around the suitcase unwatched, something he did not do with other creatures, such as the Erumpent.[3][7] 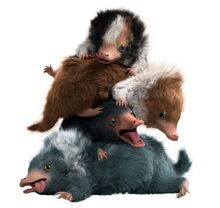 In Newt's basement, four young Nifflers lived there. It is possible that they were the young of Teddy if he found a mate sometime between December 1926, and September 1927, or if Teddy's mate was pregnant before then. However, it is equally possible that these young are the offspring of some other Niffler that Newt rescued, or were rescued on their own without a parent. One of them displays the same colour as Teddy, however, further implying for the Niffler to be Teddy's child.[3][7]

The baby Nifflers' home was somewhat like a birdcage except beautifully ornate with rich fabrics, shining jewels, and of course, gold. They get tossed into this mini home after they finally got captured and taken away from their mischievous play when Newt arrived home and calmed down all his rowdy creatures.[3][7]

Español Français
*Disclosure: Some of the links above are affiliate links, meaning, at no additional cost to you, Fandom will earn a commission if you click through and make a purchase. Community content is available under CC-BY-SA unless otherwise noted.
Advertisement