The Last Will and Testament of Albus Percival Wulfric Brian Dumbledore

Harry: "We're not going anywhere. You can speak to us together, or not at all."
Scrimgeour: "Very well then, together. I am here, as I'm sure you know, because of Albus Dumbledore's will. A surprise, apparently! You were not aware then that Dumbledore had left you anything?"
— Rufus Scrimgeour telling Harry Potter, Ron Weasley, and Hermione Granger about the will[src]

The Last Will and Testament of Albus Percival Wulfric Brian Dumbledore revealed one month after his death to Harry Potter, Ron Weasley, and Hermione Granger by Minister for Magic Rufus Scrimgeour.

For thirty-one days, the Ministry of Magic had not carried out Dumbledore's wishes as laid out in the will, instead temporarily confiscating and inspecting them under the Decree for Justifiable Confiscation for clues as to what Dumbledore intended the three teenagers to do with the items he left them. As they were not able to find any Dark magic in the items, the Ministry was no longer legally entitled to inspect them, and Scrimgeour brought them to the Burrow to give to Harry, Hermione, and Ron, interrupting Harry's birthday celebrations in the process.

The will had been properly witnessed, and had been validated by Advocates to the Wizarding World.

"They wanted to examine whatever he's left us. You had no right to do that!.... The law was created to stop wizards passing on Dark artefacts, and the Ministry is supposed to have powerful evidence that the deceased's possessions are illegal before seizing them! Are you telling me that you thought Dumbledore was trying to pass us something cursed?"
— Hermione arguing with the Minister over his belated reading of Dumbledore's will[src]

Almost all of Dumbledore's worldly possessions — including his books, magical instruments, and various other effects — were left to Hogwarts School of Witchcraft and Wizardry. He left many papers to the Hogwarts Archives, among them a set of notes on The Tales of Beedle the Bard.[1] Scrimgeour was especially suspicious that of all the individuals the late Headmaster might have bequeathed items to, he chose three students.[2]

Rufus Scrimgeour: "' To Ronald Bilius Weasley, I leave my Deluminator, in the hope that he will remember me when he uses it '… That is a valuable object. It may even be unique. Certainly it is of Dumbledore's own design. Why would he have left you an item so rare? Dumbledore must have taught thousands of students, yet the only ones he remembered in his will are you three. Why is that? To what use did he think you would put to the Deluminator, Mr Weasley?"
Ron Weasley: "Put out lights, I s'pose. What else could I do with it?"
— Scrimgeour questioning Ron[src]

Ron was bequeathed a Deluminator in Dumbledore's will. The trio used it when they were attacked by Death Eaters Antonin Dolohov and Thorfinn Rowle at Tottenham Court Road. Ron put the lights out while Hermione wiped the Death Eaters' memories, and he and Harry cleaned up the café. They used it again in the dungeon of Malfoy Manor as part of their escape.

Most importantly, Ron used the Deluminator to find Harry and Hermione after temporarily abandoning them in the autumn and winter of 1997. He instantly regretted his decision to leave, which was influenced by the negative energy within Salazar Slytherin's Locket, but was unable to find them until the sound of Hermione saying his name came from the Deluminator, which began to emit light which led him back to his friends. Ron saved Harry's life and destroyed the locket Horcrux. While Ron was glum about Dumbledore's apparent prediction that he would leave his friends, Harry pointed out that it meant Dumbledore knew he would always want to come back.[2]

The Tales of Beedle the Bard

Main article: Hermione Granger's copy of The Tales of Beedle the Bard

Scrimgeour: "' To Miss Hermione Jean Granger, I leave my copy of The Tales of Beedle the Bard, in the hope that she will find it entertaining and instructive '… Why do you think Dumbledore left you that book, Miss Granger?"
Hermione: "He… He knew I liked books."
Scrimgeour: "But why that particular book?... Did you ever discuss codes, or any means of passing secret messages, with Dumbledore?"
— Scrimgeour questioning Hermione[src]

Dumbledore left Hermione a first edition of The Tales of Beedle the Bard, a collection of wizarding fairy tales. One of those tales was about the three brothers who apparently met Death and received three objects that protected them from death. Inside the front cover was a symbol that led Hermione to want to visit Godric's Hollow, where she saw the symbol on the grave of Ignotus Peverell and where she and Harry were attacked by Nagini. Hermione later wanted to visit Xenophilius Lovegood, who had worn the symbol to the wedding of Bill Weasley and Fleur Delacour. At his home, Xenophilius told the trio about the Deathly Hallows, and they narrowly escaped an attempted ambush.

All of these events led to Harry understanding the importance of the Elder Wand, which played a vital role in his final defeat of Lord Voldemort. Also, when Harry spoke to Dumbledore after allowing Voldemort to hit him with the Killing Curse, Dumbledore revealed that he had given the book to Hermione in hopes that the trio would figure out the Deathly Hallows, but only gradually, so as to keep their focus on destroying the Horcruxes and to prevent Harry from being too tempted by the Hallows, as Dumbledore himself was.[2]

Later in life, Hermione translated The Tales of Beedle the Bard from its original runes and published a new edition of it.[3]

Scrimgeour: "' To Harry James Potter, I leave the Snitch he caught in his first Quidditch match at Hogwarts, as a reminder of the rewards of perseverance and skill '… I noticed that your birthday cake is in the shape of a Snitch. Why is that?"
Hermione: "Oh, it can't be a reference to the fact Harry's a great Seeker, that's way too obvious. There must be a secret message from Dumbledore hidden in the icing!"
— Hermione’s sarcastic reaction to Scrimgeour’s suspicion[src]

Harry received a Golden Snitch from Dumbledore; the first one he ever captured playing Seeker for the Gryffindor Quidditch team. Scrimgeour was suspicious that something was inside the Snitch, as Hermione mentioned that they had flesh memories. It should be noted, however, that this property of Snitches was not mentioned in Quidditch Through the Ages. When Harry touched the Snitch with his hand, nothing happened. Because Harry caught the Snitch in his mouth, however, it needed to be touched to his lips, which revealed that it was inscribed with the message "I open at the close."

In May 1998, after Harry viewed Severus Snape's memories and realised that he was meant to let Lord Voldemort strike him with the Killing Curse, he spoke the words "I am about to die" to the Snitch. This caused it to open, revealing the Resurrection Stone within. Harry used the stone to speak to his late father and mother, as well as Sirius Black and Remus Lupin. They stood by him as he walked to what he believed would be his death, offering him comfort and support.[2]

Scrimgeour: "According to reliable historical sources, the sword may present itself to any worthy Gryffindor. That does not make it the exclusive property of Mr Potter, whatever Dumbledore may have decided. Why do you think —?"
Harry: "Dumbledore wanted to give me the sword? Maybe he thought it would look nice on my wall."
— Scrimgeour and Harry on Dumbledore’s second bequest[src]

Dumbledore also bequeathed the Sword of Gryffindor to Harry, but the Ministry refused to turn it over to him, as it was not Dumbledore’s property. Scrimgeour speculated that Dumbledore left Harry the sword of Godric Gryffindor, because it might be capable of defeating the Heir of Salazar Slytherin. Harry scoffed at this, and grew angry over the Ministry’s continuing suspicion of him and covering up of facts instead of actually working towards the defeat of Voldemort. Scrimgeour, highly insulted, leapt up, and the two exchanged heated words before being interrupted by Arthur and Molly Weasley. Scrimgeour soon departed.

It is probable that Dumbledore put the sword in his will to clue Harry and his friends in to the sword’s importance to their quest to destroy Voldemort’s Horcruxes. As it was imbued with the venom of a basilisk, the sword is one of the few items capable of destroying one. It would later be used by Ron to destroy Salazar Slytherin's Locket and by Neville Longbottom to kill Nagini.[2] 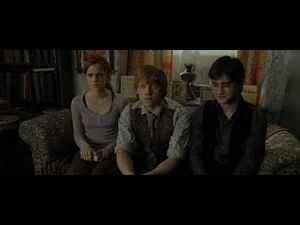 Español Français Polski Português do Brasil
*Disclosure: Some of the links above are affiliate links, meaning, at no additional cost to you, Fandom will earn a commission if you click through and make a purchase. Community content is available under CC-BY-SA unless otherwise noted.
Advertisement