"The plans I've seen look incredibly exciting, and I don't think fans of the books or films will be disappointed."
—J. K. Rowling's thoughts on The Wizarding World of Harry Potter before it was opened to the public

The Wizarding World of Harry Potter is a themed area, based on J. K. Rowling's Harry Potter series, that replaced the Merlin Woods portion of the Lost Continent region in Universal's Islands of Adventure theme park, part of the Universal Orlando Resort. The theme park includes attractions, restaurants, and shops themed around a recreation of Hogwarts Castle and Hogsmeade Village. In 2014, this was joined by Universal Studios Orlando's addition—a recreation of Diagon Alley (located on the former site of the Jaws attraction) with the Hogwarts Express train connecting the two.

"Step inside a world where magic is real."
—Universal Orlando on The Wizarding World of Harry Potter

The Wizarding World includes attractions pertaining to adventures in the film and book series, and shops where "wizard lore" is sold including a replication of Ollivanders. Since its opening on June 18th, 2010, the area has proved very popular with guests, increasing park attendance by over 50%. Versions of the land for Universal Studios Japan and Universal Studios Hollywood are now open.

A Celebration of Harry Potter

A Celebration of Harry Potter is an annual celebration a which typically occurs at Universal Studios Orlando some time in January (most recently occurring from the 29th-31st of January) and usually runs for three days. It includes question and answer sessions with participating members of the Harry Potter cast, special panels, demonstrations, and the incredible Celebration of Harry Potter Expo. In 2016, the collection of 'Wizarding Schools' was unveiled by Evanna Lynch on behalf of Pottermore.

A Portrait from the "wall of Portraits" feature, of Godric Gryffindor.

A Portrait from the "wall of Portraits" feature, of Helga Hufflepuff. 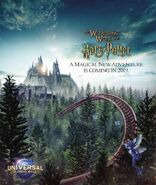 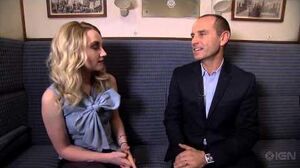 Retrieved from "https://harrypotter.fandom.com/wiki/The_Wizarding_World_of_Harry_Potter?oldid=1360824"
*Disclosure: Some of the links above are affiliate links, meaning, at no additional cost to you, Fandom will earn a commission if you click through and make a purchase. Community content is available under CC-BY-SA unless otherwise noted.