Harry Potter Wiki
Register
Don't have an account?
Sign In
Advertisement
in: Creatures from the United States of America, Foundables, House mascots,
and 3 more
English

This article is about the magical creature. You may be looking for the Ilvermorny house.

"Flying beast that can sense danger, and create storms as it flies"
— Description of the Thunderbird[src]

The Thunderbird was a large, magical avian beast native to North America, and most commonly found in Arizona in the southwestern United States.[1][2] A close relative of the phoenix,[2] the Thunderbird could create storms as it flied and was highly sensitive to danger. A House at Ilvermorny School of Witchcraft and Wizardry was named after this creature.[3]

The Thunderbird was known to change colours as it summoned storms, its iridescent feathers shifting from various shades of gold to electrifying blue, to grey and silver, to white, and even to deep navy.

The Thunderbird could also sense danger and created storms as it flied.

Thunderbirds' tail feather could be used as a core in a magic wand, with this type of wand being difficult to master, but powerful and skilled in transfiguration work. They too were also able to sense danger, much like their donors, also being able to cast curses on their own.

Shikoba Wolfe, who was of Choctaw descent, was primarily famous for intricately carved wands containing Thunderbird tail feathers. Wolfe wands were generally held to be extremely powerful, though difficult to master. They were particularly prized by Transfigurers.[4]

Around 1926, Albus Dumbledore told Newt Scamander about a Thunderbird captured by traffickers in Egypt. Newt rescued the bird, named him Frank, and travelled to America, intending to return him to his natural habitat in Arizona.[1] He arrived in New York City via a muggle transatlantic passenger ship, hoping to avoid the attention of the MACUSA, due then current laws on private posession of Magical Creature.

Due to a large number of magical occurrences in New York City during Scamander's visit, culminating in the Obscurial attack on New York, he released Frank over the city, using the Thunderbird's weather related powers to create a large rainstorm laced with Swooping Evil venom. The diluted venom helped obliviate the population, allowing the MACUSA agents to more easily cover up the major potential Statute of Secrecy breach.

After his release, Frank flew under his own power and ultimately made it to Arizona.[5]

In late 1927, Madam Seraphina Picquery, then-president of MACUSA, declared the Thunderbird a protected species, a protection that was later extended to all North American magical creatures.

Several Thunderbirds lived in Luna Scamander's suitcase. When Luna came to Hogwarts School of Witchcraft and Wizardry in the 2010–2011 school year to assist Rubeus Hagrid in the investigation of the mysterious infestation of baby Manticores within the school grounds, she accidentally let the Thunderbirds out the suitcase. One of them caught a cold and created a local thunderstorm above Hagrid's Hut.[6] 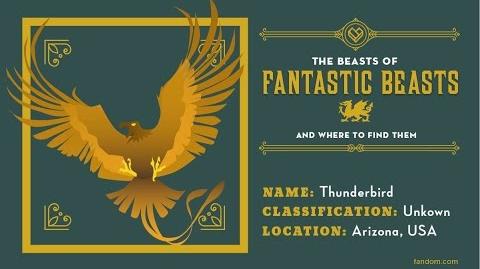 "I wanted to have one thing that was quintessentially American, and the Thunderbird is. I feel a special kinship for birds. I loved Dumbledore's phoenix, and I wanted a bird in this film with its own mythology. When the thunder bird flaps its multiple wings, it creates storms, so it's a powerful, mythical creature"
— J. K. Rowling on the Thunderbird[src]

The Harry Potter Wiki has 26 images related to Thunderbird.