"The Magazine that Changes Lives."
— The magazine's slogan[src]

Transfiguration Today was a scholarly journal focusing on the latest news on developments in the magical field of Transfiguration.[1] It published articles[3] as well as papers submitted by prominent and knowledgeable figures in the subject.[4]

The magazine was also known for awarding the Transfiguration Today Most Promising Newcomer award to accomplished Hogwarts School students who extraordinarily excelled in Transfiguration.[5]

During his student years at Hogwarts School in the 1890s, Albus Dumbledore wrote some papers to the magazine,[1] at least one of which on Trans-Species Transformation.[4] Bathilda Bagshot was favourably impressed with the paper, leading to her acquaintance with him and the Dumbledore family.[4] Around 30 years later, Dumbledore was a contributing columnist by 29 November, 1926, being "enraptured" at the honour.[6]

Porpentina and Queenie Goldstein owned a copy of this periodical.

Almost a century later, in 1991, Dumbledore was still an attentive reader of this periodical.[7] Minerva McGonagall also kept at least one issue in her office.

In the summer of 1993, during Harry Potter's stay at the Leaky Cauldron in London, he noticed some venerable-looking wizards arguing over the latest article in Transfiguration Today over breakfast.[3]

In her student years, in the 1950s, Minerva McGonagall was awarded with the Transfiguration Today Most Promising Newcomer award.[5] In her adult years, McGonagall became Transfiguration teacher at Hogwarts School, and, in her spare time, she made a scientific revision of the articles in the magazine.[8]

In 1999, the magazine ran an advertisement on the Daily Prophet, which included a coupon entitling the bearer to a free Muggle Guard with the December, 1999 issue.[9] 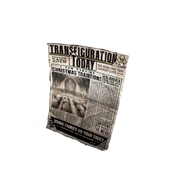 Deutsch Español Français Italiano Polski Português do Brasil Русский
*Disclosure: Some of the links above are affiliate links, meaning, at no additional cost to you, Fandom will earn a commission if you click through and make a purchase. Community content is available under CC-BY-SA unless otherwise noted.
Advertisement