Professor McGonagall: "Why is it, when something happens, it is always you three?"
Ron Weasley: "Believe me, Professor. I've been asking myself the same question for six years."
— The trio's talent for trouble[src]

The Trio, sometimes known as the Golden Trio, was the popular name given to the gang of three best friends and former Gryffindor students at Hogwarts School of Witchcraft and Wizardry, being Harry Potter, Ronald Weasley, and Hermione Granger. The trio was allied with the Order of the Phoenix, Dumbledore's Army, and Albus Dumbledore, and in their adult lives and careers, the British Ministry of Magic.

Harry Potter was one of the most famous wizards of modern time, also known as the 'Boy Who Lived' and the 'Chosen One'. He is known for being the cause of Voldemort's first downfall and is responsible for the Dark Lord's final defeat. Harry was also the teacher/leader of Dumbledore's Army and was the best in his year at Defence Against the Dark Arts. After the Second Wizarding War he became an Auror and rose to the position of Head Auror at the age of 26. By the summer of 2020 Harry was promoted to the Head of the Department of Magical Law Enforcement.

Ron Weasley assisted Harry and Hermione in the hunt for Voldemort's Horcruxes and fought in the Battle of Hogwarts. Ron was a member of Dumbledore's Army and demonstrated a talent for Wizard's Chess. After the Second Wizarding War he became an Auror, alongside Harry. Ron was an Auror for two years before retiring and joining his brother George at Weasley's Wizard Wheezes.

Hermione Granger assisted Harry and Ron in the hunt for Voldemort's Horcruxes and fought in the Battle of Hogwarts. Hermione was the founder of Dumbledore's army and was top of her year, while attending Hogwarts. After graduating Hogwarts she went to work for the Ministry of Magic, working in the Department for the Regulation and Control of Magical Creatures and the Department of Magical Law Enforcement. Hermione eventually became the Minister for Magic. 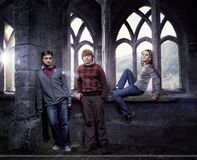 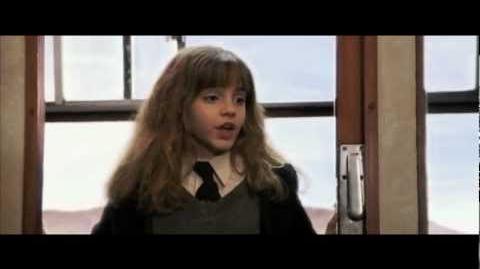 Harry Potter and the Philosopher's Stone - Harry, Ron & Hermione in the Hogwarts Express
The Trio Meet

The Harry Potter Wiki has 460 images related to Trio.

Retrieved from "https://harrypotter.fandom.com/wiki/Trio?oldid=1342465"
*Disclosure: Some of the links above are affiliate links, meaning, at no additional cost to you, Fandom will earn a commission if you click through and make a purchase. Community content is available under CC-BY-SA unless otherwise noted.