This was an umbrella stand made from a troll's leg.[1]

It stood by the door at 12 Grimmauld Place, and Nymphadora Tonks was known to have tripped over it on more than one occasion, usually causing the Portrait of Walburga Black to begin screaming.[1]

When Harry Potter, Ron Weasley, and Hermione Granger visited 12 Grimmauld Place during the Horcrux hunt following the Luchino Caffe Duel, they find the troll-leg umbrella stand knocked over, possibly done in the Order's haste to evacuate the building after the Secret-Keeper, Albus Dumbledore's death, or when Severus Snape entered and searched the building.[2]

In 2019, the troll-leg umbrella stand was captured by the Calamity and began to appear around the world as a Foundable.[3] 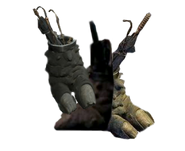 The umbrella stand as seen in Harry Potter: Wizards Unite
Add a photo to this gallery

Retrieved from "https://harrypotter.fandom.com/wiki/Troll-leg_umbrella_stand?oldid=1342567"
*Disclosure: Some of the links above are affiliate links, meaning, at no additional cost to you, Fandom will earn a commission if you click through and make a purchase. Community content is available under CC-BY-SA unless otherwise noted.