This article is about the creature. You may be looking for the N.E.W.T., O.W.L. and W.O.M.B.A.T. grade or the language.

"Anyone can speak Troll. All you have to do is point and grunt."
—The Troll language[src]

A troll is a magical creature of prodigious strength and immense stupidity. In fact, they are so stupid that they actually had a wizarding exam failing grade named after them. Trolls are grouped in the taxonomical genus Troglodytarum.[1] Trolls possess rudimentary magic, but it is not known how they apply it.

Trolls generally reach a height of about twelve feet and weigh up to a tonne. Troll whiskers have magical properties, and are sometimes used as wand cores. Their feet have two toes, both with giant toenails.

They are dangerously violent and incredibly aggressive, and they engage in unpredictable behaviour, comparable to giants. They are also incredibly low in intelligence, of which giants seem to have more.

Trolls, similar to Acromantulas, have a taste for human flesh. They enjoy it raw, but are not fussy about what they eat. Trolls are also fond of fish.[2]

Troll language is supposedly nothing more than simple grunts that only Trolls seem to be able to interpret, though skilled magical multi-linguists such as Barty Crouch can understand them. Trolls understand only a limited number of Human words, and some smarter ones can be skillfully trained as security trolls. Professor Quirrell had a gift for communicating with trolls, and then used it to set one loose in Hogwarts School of Witchcraft and Wizardry in 1991 in an effort to steal the Philosopher's Stone.

Mountain trolls have been known to tame and ride Graphorns, or at least try to ride them. Graphorns don’t seem to be very keen on the idea. [3]

"I went looking for the troll because I — I thought I could deal with it on my own — you know, because I've read all about them."
—Hermione Granger lying after encountering a Troll[src]

Trolls originated in Scandinavia, but are now found all across Europe.

Trolls are not recognised as magical beings.[4] Pierre Bonaccord, the first Supreme Mugwump of the International Confederation of Wizards, wanted to stop troll-hunting and give them rights, but his appointment to that office was contested by Liechtenstein, since they were having problems with a tribe of very dangerous mountain trolls at the time.[5]

Artemius Lawson was an outspoken advocate for the strict restraint of trolls. He thought it was wrong to allow them to roam free, stating that "they were creatures who weighed a ton, but had brains the size of a bogey".

The Black family kept an umbrella stand made out of a troll's leg in their front hall. A large stuffed troll can be found in the ese were evidently a di.ferent type of troll than the mountain variety, since the

Professor Quirrell, to create a diversion so he could go after the Philosopher's Stone, let a mountain troll into the castle on Hallowe'en, 1991. It wandered around the corridors until Harry Potter and Ron Weasley locked it in a girls' bathroom, only to realise soon after that Hermione Granger was also in that particular bathroom. With a lucky combination of derring-do, desperate magic, and "sheer dumb luck," they managed to knock it out and save Hermione.

Trolls participate in wizarding society to some extent; some witches and wizards make a career out of training security trolls. These were evidently a different type of troll than the mountain variety, since they seemed considerably more intelligent and less smelly. Dumbledore hired security trolls to guard the Fat Lady after Sirius Black attacked her. They spent all their time pacing the corridor in front of the Fat Lady's portrait, giving dirty looks to everyone who happened by and comparing the sizes of their clubs.

A Troll was Quirrell's contribution to guarding the Philosopher's Stone. 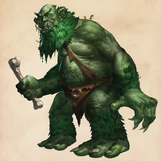 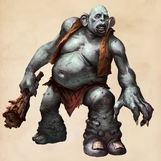 Troll of Nadroj
Add a photo to this gallery

There are four different types of Troll, each with its own highly unique set of physical differences.

The forest troll has pale-green skin and straggly hair.[7] This breed of troll is native to forests or woodlands, some may even live in the Forbidden Forest.[8]

A sub-type is the Troll of Nadroj, a kind of troll with disproportionate hands.

Part-troll are, apparently, beings with some, but not a total, amount of troll heritage or blood, as well as part human blood.

The Harry Potter Wiki has 83 images related to Troll.

Retrieved from "https://harrypotter.fandom.com/wiki/Troll?oldid=1178058"
Community content is available under CC-BY-SA unless otherwise noted.