The Unforgivable Curses are three of the most powerful and sinister spells known to the wizarding world. They are tools of the Dark Arts and were first classified as "Unforgivable" in 1717, with the strictest penalties attached to their use.[1] The three curses consist of the Killing Curse (Avada Kedavra), Cruciatus Curse (Crucio), and Imperius Curse (Imperio).

By the 1990s, using any of these three curses on another human being, Muggle or wizard, would result in a life sentence to Azkaban, unless there was sufficient evidence that the caster did so under the influence of the Imperius Curse. Many Dark wizards attempted to use this excuse to prevent themselves from incarceration if caught, particularly after the First Wizarding War.

Aurors were permitted to use them during the First Wizarding War, and during the height of the Second Wizarding War under Lord Voldemort's regime. The curses were made legal,[2] though this was presumably repealed following Tom Riddle's demise.

"Harry shouted, “Crucio!”. The Death Eater was lifted off his feet. He writhed through the air like a drowning man, thrashing and howling in pain, and then, with a crunch and a shattering of glass, he smashed into the front of a bookcase and crumpled, insensible, to the floor."
—Harry Potter’s use of the Cruciatus Curse[[Harry Potter and the Deathly Hallows|[src]]]

These three curses have been classified as"Unforgivable" in Wizarding society since 1717 according to Dumbledore.

During the First Wizarding War the Death Eaters made frequent use of these curses and in an effort to even things out the Ministry of Magic gave Aurors special permission to use them as well. After the First Wizarding War ended with the disappearance of Lord Voldemort, Alice and Frank Longbottom were tortured into insanity with the Cruciatus Curse by four Death Eaters. This crime was considered by many to be one of the most horrific crimes in living memory. The victims never recovered and spent the rest of their lives in the Janus Thickey Ward for irrevocable spell damage at St Mungo's Hospital for Magical Maladies and Injuries.

Mad-Eye Moody (actually Barty Crouch Jr in disguise) performed each Unforgivable Curse on a spider in front of the class. He said the penalty for using an Unforgivable Curse on another human being is life imprisonment in Azkaban.[3] In 1995, Harry Potter was subjected to the Cruciatus Curse twice and the Imperius Curse once by Voldemort; he was able to resist the latter, thanks to Barty Crouch Jr's teaching.

Bellatrix Lestrange brutally tortured Hermione Granger with the Cruciatus Curse at Malfoy Manor and Harry used the Imperius Curse numerous times during the trio's 1998 Gringotts break-in. In the same year during the Battle of Hogwarts, Voldemort attempted to murder Harry with the Killing Curse twice, once in the Forbidden Forest and the other during their final duel in the Great Hall. Also during this battle Bellatrix almost hit Ginny Weasley with the Killing Curse, missing by a mere inch.

During the Second Wizarding War the Unforgivable Curses were made legal by Lord Voldemort, it can be assumed that after the war ended that was reversed.

"Avada Kedavra's a curse that needs a powerful bit of magic behind it — you could all get your wands out and point them at me and say the words, and I doubt I'd get so much as a nosebleed."
—Barty Crouch Jr (as Alastor Moody), to a Defence Against the Dark Arts class[src]

Since the Unforgivable Curses are very powerful, their use requires both great willpower and great skill in order to bring about the effects. One must also have a desire to use the curses for malevolent purposes.[4] For example, Harry Potter was unable to effectively cast the Cruciatus Curse on Bellatrix Lestrange in 1996. Despite being furious with her for her murder of his godfather, he lacked the desire to cause pain for its own sake. Harry's "righteous anger" only inflicted a brief moment of pain on her.[5]

Shortly before the Battle of Hogwarts, Harry not only successfully used the Cruciatus Curse against Amycus Carrow,[6] he also cast the Imperius Curse against two individuals during the Gringotts heist which led to Harry, Hermione, and Ron getting in the Lestrange vault.[7] Soon after being "cruciated" by Harry, Amycus Carrow was also subject to an Imperius Curse cast by Minerva McGonagall.[6] Perhaps due to the fact the curses were cast during a period when the ban on their use had been lifted, there is no indication of either Harry or McGonagall being punished for using them in these circumstances.

The incantation of Avada Kedavra causes a blindingly intense green bolt of light to shoot from the end of the caster's wand, which, on contact with the victim, results in instant death. There are no secondary effects; the victim simply "drops dead" for no biological reason. It is possible that the victim's internal organs cease function. However, it seems to be more likely that the method of killing is due to the soul of the victim being magically ripped from their body. Evidence for this comes from the testimony of perhaps its most prolific caster; Lord Voldemort. Having experienced the lethal effects of a rebounded Killing Curse but surviving due to his creation of multiple Horcruxes, Voldemort described the sensation of being struck by it as having his consciousness torn from his body, accompanied by a sensation which he described as being "pain beyond pain". Muggle coroners would be unable to find a cause of death in such an attack, but the Ministry of Magic recognises the signs of the curse.

The Killing Curse has no counter-curse and cannot be blocked by magical means. However, the green energy bolt may be dodged or blocked with a solid object. For instance, Albus Dumbledore once transfigured a statue from the Fountain of Magical Brethren to shield Harry Potter from Voldemort's Killing Curse during the Battle of the Department of Mysteries. If the curse misses the victim and strikes an inanimate object instead, it may cause a small explosion at the point of impact results, which may start a fire of green flame. However, the curse may also ricochet off the object in question.

The Killing Curse was used regularly by Lord Voldemort, possibly more than any other spell, and his Death Eaters used it as well. The spell is performed verbally as a rule; Bellatrix Lestrange killed a fox with a non-verbal spell after Apparating with Narcissa Malfoy at Spinner's End, thinking that it was a lurking Auror, but it is unknown whether it was Avada Kedavra or some other lethal curse.

Only two people have ever been able to survive the effects of this curse: Harry Potter, who was given magical protection against Lord Voldemort's use of the curse through his mother's loving sacrifice and Voldemort himself due to his Horcruxes, which each have part of himself in them. Harry was later saved by the effects of Priori Incantatem when his and Voldemort's wands locked during a duel in 1995. When Voldemort struck him with a Killing Curse again in 1998, Harry was able to survive once again because Voldemort had taken some of Lily Potter's protection of Harry into his own body by using Harry's blood in his rebirth ritual in 1995. This process somehow tethered Harry to life so long as Voldemort himself was alive.

In 1996, Fawkes sacrificed himself by swallowing a Killing Curse that Voldemort aimed at Dumbledore. It killed him as it would anything living, but in a typical display of a Phoenix's response to death, he burst into flames and was immediately reborn from his own ashes.

Lord Voldemort murdered many people with this curse: victims include his father, his grandfather, his grandmother, James Potter, Lily Potter, Charity Burbage, Frank Bryce, Gellert Grindelwald, Bertha Jorkins, a German-speaking family of three, and countless more. It is known he killed enough people to create an army of Inferi.

Description: Inflicts excruciating pain on the recipient of the curse (tortures them).

The Cruciatus Curse, which inflicts excruciating pain upon the victim, requires the verbal incantation and the use of a wand. The effects of the curse depend upon the desires and emotions of the character — to produce the excruciating pain implied by the name, the caster must, according to accomplished caster Bellatrix Lestrange, truly despise the victim and to enjoy causing pain. The extreme pain inflicted by the curse makes it uniquely suited as a form of torture, and was used regularly by the Death Eaters.

When Harry Potter was made the victim of the curse in June 1995, he described it as feeling like his head was being split open while having his bones set on fire. However, since this is the only time Harry is known to have been inflicted with the Curse, and as no one else has ever given a description of its effects, it is unknown if this is how the Curse always feels.

The Cruciatus Curse caused Alice and Frank Longbottom such suffering that they were admitted to the permanent ward at St Mungo's Hospital for Magical Maladies and Injuries as cases of insanity. This was carried out by: Barty Crouch Jr, Bellatrix Lestrange, Rodolphus Lestrange, and Rabastan Lestrange. This act is considered one of the most depraved crimes of all time, in terms of damage to the victim and the sadism of their attackers.

Description: Causes the victim to perform the unquestioned bidding of the caster.

The Imperius Curse places the victim in a trance or dreamlike state, an experience is described as a "wonderful release" from any sense of responsibility, making the victim under its power profoundly susceptible to the influence of the caster, whose hold on their free will is deeply rooted in part by the victim's unwillingness to impart with the comfortable sensation and in part by their newfound lack (and thus indifference to) the moral perspective of the caster's desires, making the victim inclined to carry out whatever task thrust upon them for no other reason than that they fail to see why they should not do so, leaving him or her largely under the complete control of the caster.

The victim is calm, from doing things they would be physically incapable of otherwise, to committing horrible crimes, and they obey any order. For example, Barty Crouch Jr, while disguised as Alastor Moody, had Draco Malfoy perform a series of astonishing flips, as a Ferret, under the Imperius Curse. It is also seen that the curse works on animals, as he also casts the Imperius Curse on a spider during class.

Death Eaters have made use of this curse; for instance, in forcing Broderick Bode and Sturgis Podmore to try to steal a prophecy from the Department of Mysteries and to place several officials under their control to facilitate their take-over of the Ministry of Magic in 1997. Many Death Eaters also claimed to be under the Imperius Curse during the First Wizarding War to avoid imprisonment in Azkaban.

Resisting the Imperius Curse is possible, but extremely difficult. Only those of a particularly strong will can achieve it. Harry Potter, Barty Crouch Snr, and Barty Crouch Jr each learned to resist the curse after being subjected to its effects. Harry Potter in particular appeared to be extraordinarily good at this, as he was able to partially resist the curse from the very first time it was ever cast upon him, and he was later able to completely resist it when it was cast upon him by Voldemort himself. 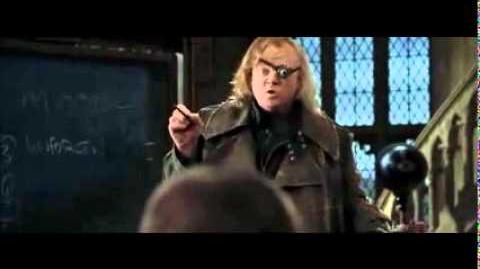 Retrieved from "https://harrypotter.fandom.com/wiki/Unforgivable_Curses?oldid=1133878"
Community content is available under CC-BY-SA unless otherwise noted.