"Only one who has nothing to lose, and everything to gain, would commit such a crime. The blood of a unicorn will keep you alive, even if you are an inch from death, but at a terrible price. You have slain something so pure and defenceless to save yourself, you will have but a half-life, a cursed life, from the moment the blood touches your lips."
—The properties of unicorn blood[src]

The Unicorn was a white horse with a horn sticking out of its head. An iconic creature of magic, the existence of unicorns was one of the worst-kept secrets of the wizarding world, as unicorns were inextricably associated with magic in the Muggle world.[1] These majestic equines possessed potent magical properties, with their tail hairs being designed by Garrick Ollivander as one of the "Supreme Cores," which was a distinction shared by only two other beasts.

Unicorn foals were born pure gold in colour. They remained so until they were about two years old, at which time they turned silver in colour. At around four years old their horn grew in. They were fully grown at about seven years old, at which at this age they turned a shade of pure white that was so bright that it made freshly fallen snow looked grey in comparison. Their hooves were golden (remaining so from their gold stage, the first two years of their life), and their blood was silver-blue and shone under the moonlight. It was not mentioned how long a Unicorn can live for.[1]

Unicorns inhabited the forests of Europe, including the Forbidden Forest by Hogwarts School of Witchcraft and Wizardry.[2][3]

Unicorns preferred a woman's touch, but the young ones were more trusting and do not mind men as much.[3] Unicorns are also so fleet of the hoof that they can rarely be caught by humans. They were also fast enough to outrun werewolves with absurd ease.[2] Wandmakers such as the Ollivander family also plucked hairs from the tails of the creatures to use in wands as cores. Not aggressive without cause, but should be treated with great respect.[1]

Unicorns were capable of moving faster than Werewolves. During the detention in the Forbidden Forest in 1992, Harry asked if a werewolf could be killing the unicorns and Rubeus Hagrid replied that they were not fast enough to catch Unicorns.[2]

Unicorns were considered pure and sacred creatures. Drinking their blood to preserve one’s life was considered a heinous and immoral crime.[2]

Various parts of the Unicorn — the horn and tail hair in particular — were used in potions. Unicorn hair in general was used for the cores of wands. Unicorn hair can be used in wandmaking; they produce the most consistent magic, least subject to fluctuations and blockages, most difficult to turn to the Dark Arts and the most faithful of wands. However, they did not make the most powerful of wands and were prone to melancholy if mishandled, although the wand wood can compensate this. The Wandmaker Garrick Ollivander made wands with unicorn hair cores.[4]

The tail hair can also be used as binding in bandages due to its incredible strength.[5] The blood of a unicorn can be used to keep a person who is near death alive, thus granting the drinker immortality, but "you will have but a half-life, a cursed life, from the moment the blood touches your lips."[2] Unicorn horn is often used as a common potion ingredient, in potions such as the Antidote to Common Poisons, Draught of Peace and Wiggenweld Potion.

The unicorn's single straight horn was used, in the Study of Ancient Runes, to symbolise the number one as a runic number symbol.[6]

A unicorn was one rare possible corporeal form of the Patronus Charm.[7]Constance Pickering's Patronus took the form of a unicorn.[8]

Merula Snyde's mother owned a unicorn for a short period.[9]

At least two unicorns were slain by Quirinus Quirrell so Lord Voldemort could drink their blood and return to power. Harry Potter, Draco Malfoy and Fang found the corpse of one of them in the Forbidden Forest.[2]

"The Unicorn was so brightly white that it made the snow all around look grey. It was pawing the ground nervously with its golden hooves, and throwing back its horned head."
—Description of a majestic Unicorn in a 1995 Care of Magical Creatures lesson[src]

In 1995, fourth year students at Hogwarts School of Witchcraft and Wizardry studied unicorns in their Care of Magical Creatures class, while Professor Wilhelmina Grubbly-Plank was standing in for Hagrid.[3]

Later, in the 1995-1996 school year, as part of the Ordinary Wizarding Level Care of Magical Creatures practical examination, students were required to choose from a wide selection of food the diet they would give a sick Unicorn.[10]

During the Calamity in the 2010s, several baby Unicorn Foundables were being guarded by large, aggressive red snakes Confoundables, which appeared throughout the Wizarding world. Volunteer members of the Statute of Secrecy Task Force had to repel the giant serpents with the Exploding Charm to stun them and liberate the baby Unicorns, allowing the Foundables to return to their rightful place.[11] 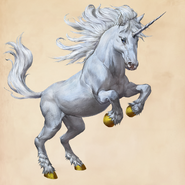 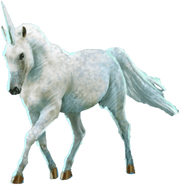 A Unicorn
Add a photo to this gallery

The Harry Potter Wiki has 46 images related to Unicorn.

Retrieved from "https://harrypotter.fandom.com/wiki/Unicorn?oldid=1385775"
*Disclosure: Some of the links above are affiliate links, meaning, at no additional cost to you, Fandom will earn a commission if you click through and make a purchase. Community content is available under CC-BY-SA unless otherwise noted.