574 Edits since joining this wiki
November 29, 2010
0 Discussion posts
"Things we lose have a way of coming back to us in the end. If not always in the way we expect"-Luna Lovegood

dead bodies of my loved ones

Hello, thank you for visiting my profile! I'm a rather obsessive Harry Potter fan and enjoy drawing. When I'm not reading Harry Potter books, I also enjoy reading Warrior Cats and books about mythical creatures. I love animals, and spending time with my wonderful cat, Rosie, and my dog, Gracie.
I left for Seattle, Washington on the eighteenth of January, and visit the long-awaited Harry Potter Exhibition on the ninteenth. I was Sorted first: The woman asked for voulenteers and my family pushed my forward with force, and I was aked my favourite House and was Sorted into Gryffindor. I pulled a Mandrake from a dirty brown pot, and it was suprisingly heavy. I threw the red Quaffle through the middle hoop on my first try, it dinged when I scored, though I nearly missed by hitting the edge of the hoop slightly. I sat in Hagrid's chair, which was huge, and was the very same chair Hermione sat on in Philosopher's Stone. I saw Buckbeak up close, and Aragog and the Hungarian Horntail's head. Voldemort's robes where placed on a platform in the dark room resembling the graveyard in Goblet of Fire. Dolores Umbridge's office was horribly pink and with the Blood Quill on her desk, along with a Decoy Detonator. Fawkes the phoenix looked down at me from his perch and blinked in greeting. The baby Thestral was small and fragile-looking, but beautiful. Rita Skeeter's acid green quill was very long. Tom Riddle's diary was covered in ink and had a Baskilisk fang through the center. Of course, photography wasn't aloud, otherwise I'd have posted pictures in a heartbeat. i did manage to get a picture of the outside building, though, and a picture of me standing in my Gryffindor scarf, large and heavy shopping bag, in front of the large poster for the Harry Potter Exhibition: A day I'll never forget.

What Harry Potter means to me

(Note: This was the comment I submitted to try and win the Wizarding World giveaway)

Thank you for reading this far, is has been a blessing to share with everyone what Harry Potter means to me. 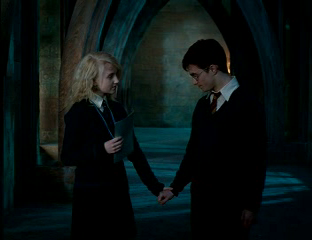 As you can see, I specialize in mostly accessories and dress robes...﻿

Favourites of all things Harry Potter

Favourite movie: Harry Potter and the Deathly Hallows: Part one

Favourite Book: Harry Potter and the Order of the Phoenix

How I started Harry Potter

I first became interested when I went to see Harry Potter and the Half-Blood Prince in theaters. I was soon advised to read the books, wich I did, I admit, a bit reluctantly. But I soon found myself imersed with the vivid wold filled with magic and adventure. I also learned a few valuble lessons, such as the fact that love is more powerful than even power itself. I plan to keep those things in mind for as long as possible. Every time I read the books or watch the movies, I feel like it expands the horizon of my imagination.

Retrieved from "https://harrypotter.fandom.com/wiki/User:*Luna?oldid=637861"
*Disclosure: Some of the links above are affiliate links, meaning, at no additional cost to you, Fandom will earn a commission if you click through and make a purchase. Community content is available under CC-BY-SA unless otherwise noted.