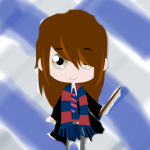 Changes on the wind

Alice_mon, or just Alice, is a fifth-year Ravenclaw student at Hogwarts School of Witchcraft and Wizardary.

A talented witch, Alice is particularly passionate about Defence Against the Dark Arts. She is also the quidditch team captain, and a prefect. She is somewhat of an addict to Honeyduke's chocolate, and spends much of her time getting lost around the castle.

Alice was born on December 18th in an unknown year, to pureblood parents Jane and Niall. She grew up in London with her little sister Anne. Her family were well aware of the death eaters, and were firm blood traitors all throughout both wizarding wars. She exhibited many magical powers as a young child, and began to harness them at a young age.

Alice was educated in a muggle school up until the age of 11. She bought her wand from Ollivander's. Upon arrival at Hogwarts, she was a hatstall between Ravenclaw and Gryffindor, but was eventually chosen for Ravenclaw. She made firm friends with a group of similarly clever but mischevious students, who called themselves 'The imps'. During flying lessons, under the watchful eye of Madam Hooch, she was spotted by then-captain of the Ravenclaw Quidditch team, Hetty Woolf. She joined the team as the Keeper, and only let in one quaffle all season, leading to Ravenclaw's triumph in both the Quidditch and House cup.

In detention for an evil deed (setting Peeves on Mr Filch), Alice found herself in detention. Mr Filch, being a stupid idiot, scheduled a detention in the forbidden forest, on a full moon. Unaware of this, Hagrid set Alice finding dead unicorns. She didn't find any unicorns. 10 minutes after setting off, Alice was attacked by the vicious werewolf, Fenir Greyback. Of course, Greyback showed no mercy. Clinging to life, Alice set off red sparks from her wand, saving her life - just.

Retrieved from "https://harrypotter.fandom.com/wiki/User:Alice_mon?oldid=814767"
*Disclosure: Some of the links above are affiliate links, meaning, at no additional cost to you, Fandom will earn a commission if you click through and make a purchase. Community content is available under CC-BY-SA unless otherwise noted.