If anyone wants a userbox created for them tell me the details, i'll add my own bit and ta-da! hopefully ;)

Caution:If you are suffering from deep Boredness Go to my blog now or answer my questions in Q&A Ummmm i have finished reading the up-to-date blog of billboi61 of the third wizarding war i will be writing a blog about my character's point of view and it will be different so im not copying just inspired!

Why do you think i'm dead!

The Dark mark in the sky coming towards him.

Not much of Luke's life is unknown except from he trained dueling with his older brother Leo.At age 6 he realized he was a animagus because of his mum, Carmilla Flitwick née bach, was a vampire he was able to fly but because when he was in her tummy she got bit by Fenrir Greyback so his animagus was a dog as a dog and a wolf are both in the canine family while his brother could choose his and chose a Eagle.As their mum was a vampire when she was born both the animagus had wings but they could remove them if they wished.

"I already know half the song cause dad.Hogwarts,hogwarts,hoggy,hoggy,hogwarts teach us something new"
—Luke Flitwick[src]

"I'm part goblin,werewolf,vampire and human and you think your blood is complicated"
—Luke Flitwick to Seamus Finnegan in 1991[src]

He was top in Charms class possibly because of his father,he earned the nickname Charms chum as his father taught charms and because he was nicknamed "Chum" by many professors. In the first match of Quidditch (Gryffindor V Slytherin) he painted himself,Leo,Seamus and Dean in the Gryffindor team colours. In the game he took a Bludger to the neck him unconscious, he woke up 3 weeks later it was so bad! When he woke up he shouted Gryffindor 3 times,his brother broke a door at the hospital wing. Even though Luke awoke his eyes were shut and when he opened them his vision was blurry. During the winter holiday he and Leo practised duelling.At charms he was as good as (sometimes better) Hermione Granger. Near the end of term he,Leo and Dean beat up Goyle as he was bullying some muggle-borns. During the whole year Luke earned 70 house points for Gryffindor and lost 30.

'Luke': "A Basilisk in a school. That could kill even Dumbledore"
Leo: "Who Would want to kill Dumbledore"
'Luke': "Ummm Slytherin"
— Luke and Leo]discussing the Basilisk[src]

In his second year he was still top of the class for charms but was frightened about Slytherin's Basilisk. He and Leo went around checking for it but was unsuccessful.In this Year Luke brought his ginger Kneazle,Cam, to school who had a good relationship with Crookshanks. Near the end of the year he performed a spell that made hologram of a werewolf in prof. Lockhart's classroom.He got more clever at defence against the dark arts He earned 120 housepoints and lose 10 through the whole year.

"I'm fine i've made up a Bertie botts beans song at home"
—Luke Flitwick to Dean,Seamus and Leo[src]

In this year he got ill and left hogwarts for 3 terms as he was hit by the hogwarts express by accident after goyle jinxed him into it. During the last term Flitwick apparated out of school and apparated back with Luke. When he heard about sirius black he sort of laughed. When Goyle saw him again goyle ran away and got knocked out by hiting his head on the divination tower. He earned no house points as he wasn't there.He got more clever at transfiguration. At home he made the bertie beans song 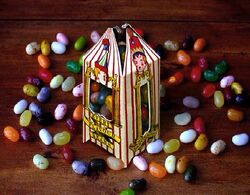 Makes me sing this awesome song

Diesel from some muggle car

The Baked Beans will make you fart

I prefer the Cherry tart

The cheese may attract Mice

In this year he was supporting Cedric and Harry during the Triwizard Tournament he also learnt about the unforgiveable curses in his defence against the dark arts. This year in charms he was still top but in herbology he got more clever at it.He was one of the people who belived harry. Earned:10 Lost:10

He joined the D.A with his brother and hated umbridge and he had 3 detentions with her.He learned more about Potions in this year and performed his O.W.L.S. Earned:120 Lost:210

His results for O.W.L.S were O=Potions,Charms,Transfiguration,D.A.D.A,Herbology,H.O.M,Care For Magical Creatures. E=. A= Muggle studies. P=Ancient runes. D=Arithmancy,Astromony. T=Divination. He was at the funeral of Dumbledore and cried half-way through it.

for the first bit of year when the ministry was fine, he was a chaser for gryffindor team. When the ministry was taken over,he and leo fleed the school because of their species.During they're flee Luke ate(!) 2 death eaters except from their right arms (As the dark mark scared luke after what happened in quidditch world cup final and dumbledore's death).

He and Leo fought in the Battle of Hogwarts. During the battle Luke defeated Fenrir Greyback in a duel (Fenrir fell with a screech) and Leo got injured by Bellatrix Lestrange.Also he broke his wand when he got hit by a reductor curse he then just slashed Bella round the face but then Ginny and others took other as he took his breath back! Also during a duel with a un-named death eater when he dodged a spell to the right and turned round his wand hit the death eaters belly and broke without thinking Luke grabbed the two halfs and stuck them in the death eater's eyes making him blind. He then ran to Minerva McGonagall and asked if she could repair it (she could).

He married Katie Bell and had 2 kids,Liam and Leona,he joined the english quidditch team and when he wasn't playing in a tournament for them he taught flying/quidditch lessons under Prof.Mcgonnagal as headmistress. He got a Chocalate Frog card for 3 reasons: Captain the English Quidditch team and won 3 tournaments. Made an advert for bertie bott's beans with his hit single bertie bott's beans (See above the bertie bott's beans). And finally he helps Hermione Granger with protecting Unicorns and Phoenixes as Phoenixes are used unfairly to heal people (and sometimes some poke the phoenixes to cry) and Unicorns are being slayed horribly by some "horrid slimy git who cares only about living" (as Luke described it on National Tv for wizards).

I am of course not a wizard (or am I?) but my name is called Luke (Not,I repeat Not Flitwick) But I love Hp!!! (not the sauce)

the other one Photo:

I'll Show you mine if you show yours! Barty Crouch Jr to Harry Potter

If he's in it. Fenrir Greyback. If not Scorpion Malfoy

below is sometin helpfull as i give my own nicknams!!

And so should all u english users in here!

Retrieved from "https://harrypotter.fandom.com/wiki/User:Philered?oldid=408315"
*Disclosure: Some of the links above are affiliate links, meaning, at no additional cost to you, Fandom will earn a commission if you click through and make a purchase. Community content is available under CC-BY-SA unless otherwise noted.