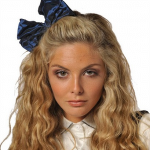 My name is Victoria Aphrodite Malfoy, and I'm the daughter of Lucius and Narcissa Malfoy. I am currently pursuing a career as a potioner.

I was born on December 10, 1978 in Wiltshire, England. I spent nearly half of my childhood being educated at Beauxbatons Academy of Magic. Recently, I was trasferred to Hogwarts School of Witchcraft and Wizardry where I was sorted into Slytherin House due to personal choice. At first, it was difficult to adjust to the new school environment, but I learned my way around the school pretty fast. Within a few months, I became a model student.

Over the past few years, I have grown distant from my relatives.  Although I am a pure blood witch, who was born into a dark family, I am an ally of the Order of the Phoenix and causes that promote equality within our community. I believe in Harry Potter and his efforts to destroy Lord Voldemort as well as muggle-born, elf, and squib rights. However, my family, (especially my Auntie Bella) disagree with this idea. They believe Lord Voldemort is doing a noble thing for the wizarding world by inflicting genocide amongst marginalized magical people. (i.e.muggle-borns, half-breeds, and squibs.)

My mother and I are very close. During my Beauxbatons years, she would visit me once a month to spend some mother-daughter time with me. On the weekends we'd go shopping in the wizarding village of Cannes, and have breakfast at a riviera. When I transferred to Hogwarts during my sixth year, my mother was very supportive and helpful on what to expect from Slytherin House.

Draco is my younger brother who I seldom get a long with. We're both our parents' pride and joy, and stand-out's in our house which causes us to butt-heads a lot. Although we may seem like we hate each other, we love each other deep-down (I think.)

I met my cousin Nymphadora Tonks in the summer of 1996 through one of my best friends Sam.  Sam had introduced us at her parents' christmas party, and we immediately struck up a friendship. I appreciated that Tonks, although an adult, was interested in having fun; she taught me how to defend myself with defensive spells and combat skills, and entertained Sam, Charlie, Ginny, Hermione and I by displaying her Metamorphmagus abilities, during dinner.

Although we were cousins, I had to take extra precautions when visting her, in fear of Auntie Bella finding out. Auntie Bella, being the blood supremacists that she was, wanted Tonks dead more than Lord Voldemort wanted Harry Potter. In all honesty, it was quite scary sneeking around, but it I felt it was worth it. Tonks was one of the few family members that I actually got a long with and her presence made my life more bearable.

My aunt Bellatrix scares the life of out me (as she does for other people.) There was a time when she was actually decent, but those times are long gone. She's starting to grow suspcious of me, tracking my every move and whom I associate with. It's gotten to a point where she actually tried to use the Cruciatus Curse on me for information, but luckily my mum showed up. I swear, the woman is completely obsessed with blood purity, and it's quite terrifying.

Retrieved from "https://harrypotter.fandom.com/wiki/User:PoshPrincess?oldid=1314926"
*Disclosure: Some of the links above are affiliate links, meaning, at no additional cost to you, Fandom will earn a commission if you click through and make a purchase. Community content is available under CC-BY-SA unless otherwise noted.