My name is Melissa Vaine, I once anticipated sharing information to assist articles and mending the loose seams on them as quickly as possible. If Johnny Depp returns to the Wizarding World, I shall return also. End of story. Oh, and too bad I'm still enjoying the ride on Harry Potter: Hogwarts Mystery, my MC's name is Maya Thomas. Not even Rowling's taking that away.

That's right, because to J.K. Rowling, I'm simply a cell comprising the HP Fandom. If a few brain cells die in an organism, they have no regard for them, but if thousands die, then it's drama. She's stated in several Twitter posts that we mean nothing to her except as a unit. So I guess the magic's a hobo's bid for riches and the morals are a hobo making billions off of two decades of hypocrisy? If Johnny Depp should return into the picture, I shall follow. Once a legend said:

"Let the past die. Kill it, if you have to. It's the only way to become what you're meant to be."
—The one and only Kylo Ren

The bittersweet journey is at an end.

5 Harry Potter Characters I Want to Hex to Pieces

These abusive serial killer had it coming for years. Remember when Voldemort's wand backfired on him after he razed Hogwarts and Mary was killed when Credence's Obscurus erupted and killed her after she attempted to belt him? If those two events don't embody the dark side of karma, I don't know what does. Plus Bellatrix loved him more than Snape could ever love Lily, and like Snape, he treats her like garbage. He's pure evil!

Snape incredibly overrated and is more or less the ultimate personification of pettiness, vindictiveness, and deceit. As annoying as Harry is, nothing justifies treating him like garbage and talking smack about his dad and smashing him in the head with a book and breaking his neck. He also did everything in his power to make Jacob's sibling's life as miserable as possible because... they had an irksome brother? He was so cruel to Neville that he, and not Bellatrix, became his Boggart, implying he's done worse than torturing his loved ones when Harry's not present. (At least Bellatrix was trying to find the man she loved upon learning he was in grave danger and she was getting pretty desperate, what was Snape's excuse?) Speaking of which, he lies to her face even more often than he forgets to shampoo his hair.

In "Hogwarts Mystery", he says some people move on from tragedy while lesser people allow it to overcome them, which makes him hypocritical as well (since he allowed losing Lily to overcome him). You wanna know the worst thing about that? He couldn't be more right, even if he won't take his own advice. Like Voldemort, he treats one of the only women that appreciates, let alone loves him, like garbage, making me wonder if Lily ever did anything to him. I'm starting to think Snape just enjoys bullying anything that moves.

You want to know one of the only things Snape said that I agree with? Harry is the definition of mediocre, having escaped dangers due to having strong friends and dumb luck. Speaking of dumb, we're dealing in a kid who flew a car to Hogwarts, broke into the Ministry because he had a bad dream, and decided to become an Auror, the job that would give him the biggest chance of getting his butt kicked. I mean, he wanted to break the Elder Wand's power, didn't he? At least I thought he did...

Not only is Harry as fake as heck, but he can't even cure his eyesight. He needs to broaden his spell arsenal. He also needs to stop pretending to one of the three most cliched protagonists of all time. We see characters with his personality so often that the relatively modern ones've come to be something else entirely. And that's not good at all.

Hermione is physically, spiritually, emotionally, mentally, socially and occupationally perfect and flawless and her blatant lack of weaknesses is utterly inordinate. She doesn't even suck at Divination or DADA, she just dislikes those subjects, she doesn't suck at them. She's insecure about her teeth even though she'd be hard-pressed to make them any whiter or straighter than they already are. Most of her choices don't make any sense or aren't pertinent. Also her voice is extremely annoying. I guess Ron has a thing for Mary Sues (and hippies?) and Harry has a thing for queens (and Chinese girls?). Who would've guessed?

1. The Minister for Magic

Truly despicable and contemptible to the highest degree, this babbling bag of dead brain cells needs to be taught a lesson... I think a butterknife is the best tool for the job. Just hearing his voice makes my skin crawl.

Cornelius Fudge's puppet might be as misunderstood and charming as MCU's Loki Laufeyson. "I am a very tolerant woman, but the one thing I will not stand for is disloyalty!" Like her, Loki was betrayed by her own family and later sent to a mainstream story setting to wreak havok on behalf of a devilish sociopath. (I mean, who the heck would murder their own daughter?!) Which is sad considering J. K. Rowling meant for her to be a complex jerk and for Fudge to be morally complex, not vice versa. She's not perfect but she is a fantastic writer nonetheless, even if Harry Potter and the Cursed Child was an insult to canon.

"Honorable" mentions go to Wormtail, Zacharias Smith, Patricia Rakepick, and pretty much anybody in the Dursley family, apart from Lily.

5 Harry Potter Characters I Want to Be BFFs With

Jacob's sibling possesses an unbreakable spirit and a heart of gold, but they've never been very good at making friends, following rules, or putting effort into academics, though their courage and compassion eventually render them surprisingly popular. I just consider them a phenomenal role model in general and best of all, they don't take Merula's crap. Which in part is why she goes from being obnoxious to being awesome by Year 5. But Jacob's sibling has always been cool. The only reason they're only my fifth favorite is because they're surprisingly bland and have an unusual lack of weaknesses, but not to the extent of being unbelievable.

Quite possibly the most emotionally complex character J. K. Rowling has ever conceived, Leta was a kid who got picked on who (unlike some people) didn't become what she hated and was determined to turn over a fresh leaf. But she didn't take it huddling in a corner and shielding her face with her arms, since she performed some pretty savage curses when Hufflepuffs and presumably other House attendees got particularly foul. She was also a benevolent governor who died in one of the most noble ways imaginable. Did I mention Zoe Kravitz made her insanely charismatic? Because she doubtlessly did.

He is fantastic. Mostly because of his unbreakable will and ideal personality consisting of strong morals and a desire to better the world in wise and logical ways.

There's so many things to say about this lovely and powerful witch, I don't even know where to start. She's so endearing and lovable and smart and magically gifted and a witch to be treasured and I want to hug her more than words can express. Her love for Voldy is boundless and it makes her do stuff that's bat-ess crazy! Like incinerating the Burrow or kicking some Snatchers' butts or making Mary Sue's arm a jack-o-lantern or throwing a knife faster than Dobby can teleport. But it's all good, the Burrow's good as new, the Snatchers were asking for it, and maybe Mary Sue was humbled that night. For once in her entire life. And of course Dobby had the nerve to defy her and escape with a valuable hostage and think he could leave without a scratch. This is why you don't mess with a queen like Bellatrix. She's stronger than you and she's not going to hold back and let you antagonize her. Heck, if Voldemort had half a mind to push her off a cliff, she'd probably try to stop him, putting it lightly.

While she's never obliged to tolerate her enemies' crap, however, she does seem to show other Death Eaters as much love or hate as they show her. Like not trusting Snape or Lucius because they hate her and don't trust her at all. But she and Draco are really chill and she even taught him Occlumency. She's also nice to Kreacher because he's nice to her, and his perception of her is doubtlessly identical. Plus she's adorable and witty, just like Loki, and evidence points that prior to Azkaban she was insanely, almost impossibly beautiful (I have a picture somewhere...) But I don't care about looks (when you've had my extremely bittersweet and eventful life experiences, you've seen the best and worst of physical appearances firsthand) but I do care about personality, morality, and strength, and Bellatrix is just the best. She practically bleeds affection. (I love her so much!)

She is beauty, she is grace, she will curse off your face! If irresistibility is power, then she's undoubtedly correct about being the most powerful witch ever to set foot in Hogwarts. Let's see, she's extremely hard-working, doesn't take crap from anybody, prodigious magic occluded only by Jacob's sibling, is wickedly creative, has a great sense of humor right down to that iconic eye roll, speaking of her eyes, they're gorgeous....

Honorable mentions go to Draco Malfoy (mostly for existing), Albus Dumbledore (mostly for giving Voldy so much grief), Ginny Weasley (for being utterly brilliant), James Potter (for being courageous and showing Snape what it's like to be relentlessly bullied), Alastor Moody (again, for existing), and Nymphadora Tonks (despite being bland, "Hogwarts Mystery" made her a fantastic person overall).

Infiltration of the British Ministry of Magic (2020)

Infiltration of the French Ministry of Magic 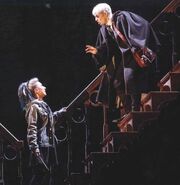 Skirmish at St Jerome's Church
Add a photo to this gallery 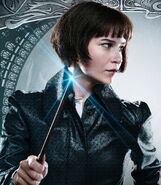 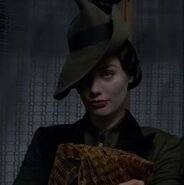 User Vinda Rosier Favourite
Add a photo to this gallery

Retrieved from "https://harrypotter.fandom.com/wiki/User:SWLover2?oldid=1372536"
*Disclosure: Some of the links above are affiliate links, meaning, at no additional cost to you, Fandom will earn a commission if you click through and make a purchase. Community content is available under CC-BY-SA unless otherwise noted.
FandomShop Fandom IG GalaxyQuest