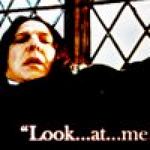 "Hogwarts will always be there to welcome you home." - J.K. Rowling

1 of 14
Add photo
Who Am I in the Wizarding World?

I have a very rare black barn owl that I named Shay. My parent's bought me Shay on my first visit to Diagon Alley.

I bought my wand at Ollivander's in Diagon Alley.

I am a half-blood witch. I have one sister, a mom and a dad.

My sister is just starting her first year at Hogwarts this year, and I will be starting my fourth.

My Patronus is a Phoenix because my Dad has one as a pet, and when I was

young I was always fascinated by how the Phoenix would die, and then be

reborn from his ashes. His name is Andrey.

My animagus is a horse. I can transform into it at any time I want.

My best friend is muggle-born.

On my first day of Potions in my first year at Hogwarts, I absolutely loved

my teacher, Professor Snape. He is so fascinating, and he really knows how to create potions.

He has taught me to be so much better at Potions, and I hope to achieve an 'Outstanding' on the

Potions O.W.L next year. Hopefully if I do, that will make Professor Snape happy. (:

My boggart is Professor Snape dead because that is my greatest fear!

Explanation of my username:

Team Snape because my favorite character is Severus Snape.. and 1960 because that's the year he was born (:

Official Member of the Order of the Phoenix

HARRY POTTER IS MY LIFE♥

Retrieved from "https://harrypotter.fandom.com/wiki/User:TeamSnape1960?oldid=1303625"
*Disclosure: Some of the links above are affiliate links, meaning, at no additional cost to you, Fandom will earn a commission if you click through and make a purchase. Community content is available under CC-BY-SA unless otherwise noted.