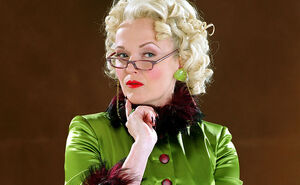 Any time we get news about J.K.Rowling writing something new, we get super excited! This time, we're even more excited because she has added something to Pottermore for the Harry Potter fans out there! Rowling has published a new report from the Quidditch World Cup where members of Dumbledore’s Army, including the trio, are in attendance, and she has written it through the voice of Rita Skeeter and her Quick Quotes Quill!

For people not on Pottermore, this report is the latest in a series of Quidditch World Cup reports (most of which has been written by Ginny Weasley). The Quidditch World Cup final is apparently coming up this Friday! To read Rita's article, keep scrolling!

There are celebrities – and then there are celebrities. We’ve seen many a famous face from the wizarding world grace the stands here in the Patagonian Desert – Ministers and Presidents, Celestina Warbeck, controversial American wizarding band The Bent-Winged Snitches – all have caused flurries of excitement, with crowd members scrambling for autographs and even casting Bridging Charms to reach the VIP boxes over the heads of the crowd.

But when word swept the campsite and stadium that a certain gang of infamous wizards (no longer the fresh-faced teenagers they were in their heyday, but nevertheless recognisable) had arrived for the final, excitement was beyond anything yet seen. As the crowd stampeded, tents were flattened and small children mown down. Fans from all corners of the globe stormed towards the area where members of Dumbledore’s Army were rumoured to have been sighted, desperate above all else for a glimpse of the man they still call the Chosen One.

The Potter family and the rest of Dumbledore’s Army have been given accommodation in the VIP section of the campsite, which is protected by heavy charms and patrolled by Security Warlocks. Their presence has ensured large crowds along the cordoned area, all hoping for a glimpse of their heroes. At 3pm today they got their wish when, to the accompaniment of loud screams, Potter took his young sons James and Albus to visit the players’ compound, where he introduced them to Bulgarian Seeker Viktor Krum.

About to turn 34, there are a couple of threads of silver in the famous Auror’s black hair, but he continues to wear the distinctive round glasses that some might say are better suited to a style-deficient twelve-year-old. The famous lightning scar has company: Potter is sporting a nasty cut over his right cheekbone. Requests for information as to its provenance merely produced the usual response from the Ministry of Magic: ‘We do not comment on the top secret work of the Auror department, as we have told you no less than 514 times, Ms. Skeeter.’ So what are they hiding? Is the Chosen One embroiled in fresh mysteries that will one day explode upon us all, plunging us into a new age of terror and mayhem?

Or does his injury have a more humble origin, one that Potter is desperate to hide? Has his wife perhaps cursed him? Are cracks beginning to show in a union that the Potters are determined to promote as happy? Should we read anything into the fact that his wife Ginevra has been perfectly happy to leave her husband and children behind in London whilst reporting on this tournament? The jury is out on whether she really had the talent or experience to be sent to the Quidditch World Cup (jury’s back in – no!!!) but let’s face it, when your last name is Potter, doors open, international sporting bodies bow and scrape, and Daily Prophet editors hand you plum assignments.

As their devoted fans and followers will remember, Potter and Krum competed against each other in the controversial Triwizard Tournament, but apparently there are no hard feelings, as they embraced upon meeting (what really happened in that maze? Speculation is unlikely to be quelled by the warmth of their greeting). After half an hour’s chat, Potter and his sons returned to the campsite where they socialised with the rest of Dumbledore’s Army until the small hours.

In the next tent are Potter’s two closest associates, the ones who know everything about him and yet have always refused to talk to the press. Are they afraid of him, or is it their own secrets they are afraid will leak out, tarnishing the myth of He Who Could Not Be Named’s defeat? Now married, Ronald Weasley and Hermione Granger were with Potter almost every step of the way. Like the rest of Dumbledore’s Army, they fought in the Battle of Hogwarts and no doubt deserve the plaudits and awards for bravery heaped upon them by a grateful wizarding world.

In the immediate aftermath of the battle Weasley, whose famous ginger hair appears to be thinning slightly, entered into employment with the Ministry of Magic alongside Potter, but left only two years later to co-manage the highly successful wizarding joke emporium Weasleys’ Wizard Wheezes. Was he, as he stated at the time, ‘delighted to assist my brother George with a business I’ve always loved’? Or had he had his fill of standing in Potter’s shadow? Was the work of the Auror Department too much for a man who has admitted that the destruction of He Who Could Not Be Named’s Horcruxes ‘took its toll’ on him? He shows no obvious signs of mental illness from a distance, but the public is not allowed close enough to make a proper assessment. Is this suspicious?

Hermione Granger, of course, was always the femme fatale of the group. Press reports of the time revealed that as a teenager she toyed with the young Potter’s affections before being seduced away by the muscular Viktor Krum, finally settling for Potter’s faithful sidekick. After a meteoric rise to Deputy Head of the Department of Magical Law Enforcement, she is now tipped to go even higher within the Ministry, and is also mother to son, Hugo, and daughter, Rose. Does Hermione Granger prove that a witch really can have it all? (No – look at her hair.)

Then there are those members of Dumbledore’s Army who receive slightly less publicity than Potter, Weasley and Granger (are they resentful? Almost certainly). Neville Longbottom, now a popular Herbology teacher at Hogwarts School of Witchcraft and Wizardry, is here in Patagonia with his wife Hannah. Until recently the pair lived above the Leaky Cauldron in London, but rumour has it that Hannah has not only retrained as a Healer, but is applying for the job of Matron at Hogwarts. Idle gossip suggests that she and her husband both enjoy a little more Ogden’s Old Firewhisky than most of us would expect from custodians of our children, but no doubt we all wish her the best of luck with her application.

Last of the ringleaders of Dumbledore’s Army is, of course, Luna Lovegood (now married to Rolf Scamander, swarthy grandson of celebrated Magizoologist Newt). Still delightfully eccentric, Luna has been sweeping around the VIP section in robes composed of the flags of all sixteen qualifying countries. Her twin sons are ‘at home with grandpa’. Is this a euphemism for ‘too disturbed to be seen in public’? Surely only the unkindest would suggest so.

Sundry other members of the Army are here, but it is on these six that most interest is focused. Wherever there is a red head one may make an educated guess that it belongs to a Weasley, but it is difficult to tell whether it is George (wealthy co-manager of Weasleys’ Wizard Wheezes), Charlie (dragon wrangler, still unmarried – why?) or Percy (Head of the Department of Magical Transportation – it’s his fault if the Floo Network’s too busy!). The only one who is easy to recognise is Bill who, poor man, is grievously scarred from an encounter with a werewolf and yet somehow (enchantment? Love potion? Blackmail? Kidnap?) married the undeniably beautiful (though doubtless empty-headed) Fleur Delacour.

Word is that we shall see these and other members of Dumbledore’s Army in the VIP boxes at the final, adding to the glitz and razzmatazz of a gala occasion. Let us hope that the behaviour of two of their younger hangers-on does not embarrass them, heaping shame on those who have previously brought honour to the name of wizard.

One always hesitates to invade the privacy of young people, but the fact is that anyone closely connected with Harry Potter reaps the benefits and must pay the penalty of public interest. No doubt Potter will be distressed to know that his sixteen-year-old godson Teddy Lupin – a lanky half-werewolf with bright blue hair – has been behaving in a way unbefitting of wizarding royalty since arriving on the VIP campsite. It might be asking too much that the always-busy Potter keep a tighter rein on this wild boy, who was entrusted to his care by his dying parents, but one shudders to think what will become of Master Lupin without urgent intervention. Meanwhile, Mr and Mrs Bill Weasley might like to know that their beautiful, blonde daughter Victoire seems to be attracted to any dark corner where Master Lupin happens to be lurking. The good news is both of them seem to have invented a method of breathing through their ears. I can think of no other reason how they have survived such prolonged periods of what, in my young day, was called ‘snogging.’

But let us not be severe. Harry Potter and his cohorts never claimed to be perfect! And for those who want to know exactly how imperfect they are, my new biography: Dumbledore’s Army: The Dark Side of the Demob will be available from Flourish and Blotts on July 31st.

Thoughts? We always love hearing from any of the characters from Harry Potter!

Retrieved from "https://harrypotter.fandom.com/wiki/User_blog:Gcheung28/New_Rita_Skeeter_Article_from_J.K._Rowling_on_Pottermore?oldid=858925"
*Disclosure: Some of the links above are affiliate links, meaning, at no additional cost to you, Fandom will earn a commission if you click through and make a purchase. Community content is available under CC-BY-SA unless otherwise noted.
FandomShop Newsletter Join Fan Lab