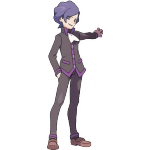 The purpose of the cast list is to detail those who have been confirmed to be appearing in the movie, not to speculate on who might be. Do not revert my edits again. Jayce

When an individual is confirmed to appear in the movie he or she will be added to the list, not before. The descriptions are completely redundent, and only serve to clutter up the page. Again, Do not revert my edits. Jayce

The cast list is, (as it's name implies) a list of cast members. Until we know the names of the cast members we are not adding them to the list. Jayce

Sorry about that, and yes, I must. People who read the cast list are doing so because they want to know which actors play which charcters. There is no point adding characters to the cast without knowing which actors play them. Jayce

Maybe, but there are a few things that need to be taken into consideration. Firstly, there are plans to split the article in two, one for each movie. Any edits to the cast will only need to be done again later, so it may be best to wait for the split first. Secondly, it won't necessarily be a long time before we know the actors names. After all, minor anouncements about the cast are being made almost daily. Thirdly, when the children are added to the cast, I don't feel they require there own section. They would be better off under "wizarding world related". Finally we need to consider the possibility (however unlikely) that the epilogue may end up on the cutting room floor. I know this most certainately won't happen, but since David Yates cut almost all the Horcrux scenes from Half-Blood Prince I've come to accept the fact that anything is possible. Jayce

Albus and James can go under "Hogwarts students" and Lily and Hugo can go under "wizarding world related". Scorpius, Astoria and Rose need to be left off for the time being, as we don't know that they are in it yet. I still think it would be more appropriate to wait. As easy as it is to add the actors names when we know them, it would be equally easy to add both actor and character at the right time. Jayce

Thank you for the Happy Bithday. I'm sure they will be in the movie, but remeber what KAJ said about encyclopedias needing to verify their contents? Right now we cannot verify that Rose and Scorpius will be in the movie however likely it is, so they need to be left off for the time being. I'm sure we will be getting photos of them any day now, so don't worry about it. Also I don't think putting them under a sub-heading for students is appropriate, as Hugo and Rose are not students yet. James and Albus can go under students properly. Jayce

Hey, thanks. Did you see all those people lurking around, pretending to not know what was going on. Then, as soon as the actors arrive, they all whip out their camera phones. Just so you know I'm planning to divide the articles soon. Your help would be appreciated. Jayce

Much appreciated. I've already split the articles. Now we just have to sift through them, and make sure all the information corresponds to the relative parts. Jayce

Hi! This is what you can do:

Hi, I saw your edit to Harry Potter and the Goblet of Fire (Film) and to Mrs. Norris. Look at this page. There I found names of three cats for her. There are also the names for other animals. Perhaps it is reliable enough. Harry granger 19:27, June 8, 2010 (UTC)

Hi, please don't add Poppy Pomfrey to the Harry Potter and the Philosopher's Stone (film) page. We know that she doens't appear in the movie as we've already had this discussion on her talk page. The healer you're referring to is Unidentified Hogwarts Healer (IV) who is a different character.

Pansy Parkinson in Goblet of Fire

Hi, I saw your edit to Harry Potter and the Goblet of Fire (Film) and to Pansy Parkinson. After my informations Pansy was played by Danielle Crockford in GoF. I found it here, but I don't know if it is reliable enough, source: http://books.google.de/books?id=MWHlLrTOVw0C&pg=PA332&lpg=PA332&dq=Pansy+Parkinson+Danielle+Crockford&source=bl&ots=aXx_oYSlaQ&sig=E3B0TpJPpanTGUJTm2vcY0LSmEM&hl=de&ei=8NUPTNbmJ5WgOO7tpfwK&sa=X&oi=book_result&ct=result&resnum=3&ved=0CCEQ6AEwAg#v=onepage&q=Pansy%20Parkinson%20Danielle%20Crockford&f=false Harry granger 18:01, June 9, 2010 (UTC)

Hi, I saw an edit to Harry Potter and the Half-Blood Prince (Film), possible yours. S. Fawcett was in the book the girl. Jack Bagley is a boy. He could better be Stebbins, who was the boy of the two snogging pupils who were punished by Severus Snape. Harry granger 21:54, June 9, 2010 (UTC)

Hi, I saw your answer on the Talk page. I would appreciate if you are right. I hope to see Charlie in both films with the scenes of the book because I like the character as described by Jo. Let's hope the best. Harry granger 18:00, July 5, 2010 (UTC)

You are right. I also think it would be a very great loss not to put him as the only Weasley family member in the last two movies. When he would not have been mentioned, o. k. But he has scenes. O. k. they are not great, but there are some - and it is the last chance. So I also find he has to be in the movies. Harry granger 18:19, July 8, 2010 (UTC)

Retrieved from "https://harrypotter.fandom.com/wiki/User_talk:CoolDudeAl?oldid=363213"
*Disclosure: Some of the links above are affiliate links, meaning, at no additional cost to you, Fandom will earn a commission if you click through and make a purchase. Community content is available under CC-BY-SA unless otherwise noted.