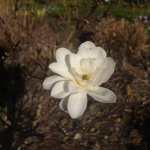 Hi there! When you want to reuse a reference you give it a name and then you can just refer to it. Looks like this:

Or you can use the short codes to make typing quicker: {{HBP|F}} = Harry Potter and the Half-Blood Prince (film)

There are short codes with options for all the major sources, but they are pretty new still so the full list is currently here: User:Ironyak1/Link Template List

No worries. Don't stress the mistakes - that's a very extensive start you got there and everone will add their touchups and improvements. Cheers --Ironyak1 (talk) 18:32, June 4, 2016 (UTC)

Hey there. So I was just talking with an admin about this and unfortunately given the earlier similarities to the Pottermore text, they felt it was better to keep the current version and rebuild from there to restore the best parts of your original work. There is a strong concern about copyright issues so it is safer to have a less well worded version that is more unrelated to the Pottermore version and then work to improve it. I understand it sucks to have one's work removed, especially in that manner, and I also would have preferred for things to be improved in stages. I am looking over the difference for that edit and will help restore some of the highlights from your version. Hope that helps (as much as it can). --Ironyak1 (talk) 12:47, June 29, 2016 (UTC)

That's no problem! When I originally made the biography, none of it was worded like Pottermore's but it got deleted when someone else started editing. I got a bit upset! When I tried to salvage it and brought Pottermore into it, I had planned to reword it by re-reading and remembering what I originally put but any progress got deleted again instead of said person editing what needed to be changed like it should be done. I just wanted to know if it was okay for me to start putting some of my original work - which was worded in my own way - back into the biography without them trying to delete it again. As you can see from the other pages I made yesterday, the biographies were my own work and not copied from Pottermore which was how Isolt's page was going to be. I guess I was upset that some things that didn't need to be changed had been and that they had ignored my kind ask to let me make a biography before they decided to ignore that ask, then ask other people to let them make a biography, and then get my hard work deleted by doing so. But thank you for taking on what I said and finding a resolution before everything went out of hand and sorry for bringing you into it! :) --User:EmilyMills22 12:57, June 29, 2016 (UTC)

So you know, anything you Publish can be found again - by the Edit button there is a down-arrow that allows you see the History of the page. Look through the versions (click on the dates) and you can copy back out anything you want to restore to the article. When you run into a edit conflict (someone changes the article while you are in edit mode), all your edits are at the end of the page and can be copied to the article at the top, or I often paste them into a separate document and then work through how to add them back into the article. Cheers --Ironyak1 (talk) 13:24, June 29, 2016 (UTC)

Yes, I had been through the History of the page before but thanks for reminding me of it! Unfortunately I do not see the original work I was going to post. I usually do make a copy and I had pasted part of the biography to a separate document which is how I salvaged part of my original biography. But when I had completed it and checked the Recent Activity page and saw no one had made any changes since I last checked I decided to publish the rest of the article without copying and pasting it elsewhere and it was just my luck that in the five seconds since I checked - someone else beat me to it! But in the future, I will make a biography in a separate document and then add it to the page. -User:EmilyMills22 13:36, June 29, 2016 (UTC)

Yeah, I ran into a edit conflict yesterday as well (with an admin no less) and had to ask why my stuff got lost. It happens more often of course when everyone's excited about new material and working fast to add it in. I tend to make a series of small edits (1 paragraph or about 5 mins of work) and then Publish to minimize the overlap, but it still happens - just part of collaborative work. I think how you handled it was the right way and the fact that others called them out about the mass replacement shows that such actions are unusual and not well liked. I'll be off Isolt Sayre for a while if you want to work on it. Cheers --Ironyak1 (talk) 14:00, June 29, 2016 (UTC)

Since you took part of the discussion over at Forum:Character Images and Infoboxes, I thought it would interest you to know that the vote on the matter has been opened. Cheers! --  Seth Cooper  owl post! 00:41, August 4, 2016 (UTC)

Retrieved from "https://harrypotter.fandom.com/wiki/User_talk:EmilyMills22?oldid=994414"
Community content is available under CC-BY-SA unless otherwise noted.