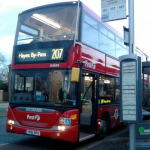 Hello! No, I don't know who the actress is, and I don't know which character (if any specific character) she plays. We can only use official sources, that is, officially-licensed sources such as Warner Brothers, the actor's agent, or some other reputed source -- as far as I'm aware, no source that meets these criteria refers to this background extra as playing Pansy Parkinson. --  Seth Cooper  owl post! 18:54, November 12, 2014 (UTC)

Hi, I had a look, too, and I've found that we once had an article about an actress named "Katharine Nicholson", who was said to have portrayed Pansy Parkinson. It's exactly the same picture. But it was deleted. This is the text:

This page has been deleted. The deletion and move log for the page are provided below for reference.

I'm afraid I don't know how to reach them. I wouldn't put much stock in it; it's more than likely that that girl was just one more extra on a non-specific background student part. --  Seth Cooper  owl post! 21:48, November 12, 2014 (UTC)

Retrieved from "https://harrypotter.fandom.com/wiki/User_talk:Kabilan29?oldid=876619"
*Disclosure: Some of the links above are affiliate links, meaning, at no additional cost to you, Fandom will earn a commission if you click through and make a purchase. Community content is available under CC-BY-SA unless otherwise noted.