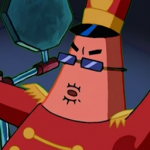 Hello, SorcererSupreme21.  You made an unexplained mass removal of information from the Isolt Sayre article (this).  I could understand reworking/reorganizing the info already there, and adding your own, but a lot of information was outright deleted and not put back despite there being nothing seemingly objectionable about them. May I remind you that the wiki is a collaborative work and many editors will be contributing.  Please respect others' work by refraining from unexplained deletions.  --Mercury McKinnon (talk) 02:52, June 29, 2016 (UTC)

Let me clear this up. When I first saw the page earlier this morning, it was nothing more than a small, image-less infobox, a short paragraph, an Appearances section, and the reference to Pottermore. So I spent a long time throughout the day (I had a lot of other stuff to do today, so it took longer than expected), and I had to check what changes and additions were being made to the article at least once every 10 minutes, meanwhile I was still editing the original draft. I did copy/paste what I had to the then-current version of the page. I tried to combine both of the biographies, however I noticed a large amount of it seemed to be plagiarized from Pottermore, which is of course against policy, and I made a lot of effort not to plagiarize, and I did not realize how much got deleted until you brought that to my attention.

This is in regard to the same page mentioned above. I have deleted what I originally wrote here to put it in a simpler way now that I have asked another user for their help and a resolution has been found. I don't want an argument so I would like to forget the entire thing once I have explained why I wanted to talk to you! :)

I made the Isolt Sayre page yesterday. I made an infobox and a small introductory paragraph and when I saved it, I kindly asked other users not to edit because I was making a biography - with my own wording, not Pottermore's - and everything would get deleted had they edited. I checked every ten minutes to make sure no one did anything and save for a picture and a reference - no one did. But when I went to save my biography - which I spent several hours workng on - it was deleted because you had edited and started to make your own biography. I guess I got upset because I wasted my time and I don't know whether you saw my warning which was posted before yours but you should have checked considering you were worried someone else would do the same to you. I tried to salvage my work and unfortunately, I had to put some things in from Pottermore which I intended the change. You should have helped me and the other users who started help change this by putting some of your work in with my work instead of deleting my work again and therefore everything me and other people did. You shouldn't massively delete everything because this wiki believes in collaboration. And if you believe in asking users to consider that your editing a page, then you should have checked the history of the page to make sure no one else had already said that. I did leave the work you made and already saved at the bottom of the page for you when I put my second work up. Another user is going to start merging my work with your work and I may help them so please don't delete anymore of my work. I want us to work together and forget about this! So I don't want this argument to continue, not on this page or any other page! Thank you :)-- EmilyMills22 (User talk:EmilyMills22) 13:18, June 29, 2016 (UTC)

I had a very valid reason for undoing your edit to the page. You rewrote a lot of lines that did not need re-editing. You have said the exact same thing in a slightly different way which means your edit was unnecessary and therefore was reversed. For example you changed the line "because Pukwudgies traditionally do not share their name" to "because, per the traditions of his people, "William" did not wish to reveal his real name." You have said the same thing. Your given reason for changing a lot of the article was because it was "incorrect" but it wasn't incorrect. When I wrote it, I wrote it with the Pottermore article up on my computer as I reworded it. Not one thing was left out or wrote wrongly. I also don't know where you got the "ten years later" part from. That is the only thing that has been incorrect. Gormlaith went to Ilvermorny in 1634. We do not know how old Chadwick and Webster were when William and Isolt saved them. You cannot prove it was 1624 when William and Isolt saved them and she told William to leave. An age was not given when they were saved and Jo does not say how much time went by before Gormlaith arrived. She only says the year she arrived was 1634. Therefore, we can only determine that it had been several years. I will be undoing your revision again. You are free to add the links for Isolt's wand and a couple of other links too such as the Mayflower one but please don't rewrite entire lines and paragraphs that don't need editing. If you continue to keep undoing the revision, I will have to involve a moderator. --May32 (talk) 18:09, June 30, 2016 (UTC)

It's called rewording, and if you weren't happy with it, then only reword the things you feel necessary to fix or reword. I was rewording things to fit Wikia's Manual of Style, and there were several "span" tags that did nothing, so they were removed. There were plenty of other things that needed cleaning up. You, however, did not give a valid reason in the edit summary to undo an edit. All actions of undoing edits must have a valid reason in the edit summary. SorcererSupreme21 (talk) 19:32, June 30, 2016 (UTC)

I know how the guidelines work. I used to edit on the wikia for many years - I helped to make a lot of those guidelines - until I left a couple of years ago because I was unwell. What you edited did not need editing. You changed entire lines that did not need changing. You simply just wanted to write it in your own way - you didn't do it because it was needed. I have seen many edits undone on this site for being unnecessary. And then you went and added something that was incorrect - you cannot prove it had been ten years. It was speculation. So, I undid it.

Also, if you go through the history of the page, you will see that when I undid your revision the first time, I very clearly stated that there had been a "lot of unnecessary changes saying the same thing in a different (way)". I stated it was unnecessary. I gave you a reason - it's not my fault if you don't read it. And judging by the heading above mine on your talk page, this isn't the first time you haven't read what someone has put in the edit summary properly before you then completely deleted lines and paragraphs in favour of your own wording. Taking the tags out is fine - unfortunately, the wikia does these things automatically sometimes so its up to other users to notice and help out. I have seen them many times and took them out. Adding links is also fine. Rewording something that isn't completely right is fine. But don't change something that doesn't need to be changed. I see you have edited some of those lines again. Some of what you reworded is fine but some of it was not needed again. I am not going to undo the revision again because I don't want an edit war. Just try not to massively edit lots of lines and paragraph that don't need to be changed again or you will upset a fourth person this week. --May32 (talk) 20:12, June 30, 2016 (UTC)

Ironically, those "span" tags were added to your message. :|

Glad to reach a mutual agreement too. I purposely put the "span" tag in my message to signify that was I was referring to your question of why they were on the page. I agree the page needed cleaning up - every new page or information usually does - but I did not agree with the rewording of entire lines and paragraphs that I spent time on and simply didn't need rewording. But I will let it go this time. Since we both love editing and will continue to edit on this wikia, lets move on. --May32 (talk) 20:12, June 30, 2016 (UTC)

Retrieved from "https://harrypotter.fandom.com/wiki/User_talk:SorcererSupreme21?oldid=984623"
*Disclosure: Some of the links above are affiliate links, meaning, at no additional cost to you, Fandom will earn a commission if you click through and make a purchase. Community content is available under CC-BY-SA unless otherwise noted.