PLEASE LEAVE YOUR MESSAGES BELOW:

Hi, I've never used Twitter, I have no account and I did not consult the account of others. But I think this may be a good idea for those who normally use this new means of rapid communication. When the image files have detailed records (as is often the case, but not on this picture it!), I think it might be more interesting to make a link to the page where you can learn where they come from: http://harrypotter.wikia.com/wiki/File:Demattackharry10.jpg instead of http://images4.wikia.nocookie.net/harrypotter/images/f/f4/Demattackharry10.jpg (unless it is willing to prevent someone upload another image instead). Have a good day. --{{SUBST:Utilisateur:Famini71/autosig}} 07:48, January 18, 2010 (UTC) Famini71

SOUNDS AMAZING! I will start following you. I'm at school right now and don't have much time to spend on the wiki! My Twitter is Tyrell Lisson (My Name ... Yes odd). —The preceding unsigned comment was added by Profiteor (talk • contribs).

I don't really know anything about twitter.--Matoro183

Your photos are still cool. There are better and have a huge good quality. I still love it to see them. Good job You-Know-Who. And are you a proffesionial?--Station7 22:20, January 23, 2010 (UTC)

I was wondering how you make your animated pictures cause they are really cool. :) User:Conaboy2

I just mean look through it for any redirects? Cavalier, as you might know, told me that editing other user's user pages randomly without getting their permission first is vandalism, and I was blocked for that once already. I wouldn't do anything inappropriate to your user page obviously. I'm not that kinda user. -- GrouchMan (Send an owl then scram!! P.S. Have a rotten day!!!!) 15:38, May 5, 2010 (UTC)

Glad to see you back! As GrouchMan had told you he had already been blocked for fixing redirects on other users' pages without permission. Once he was back, he continued with this behaviour and, after eight warnings about this, he was banned. --  Seth Cooper  owl post! 17:36, May 23, 2010 (UTC)

I'm not very....acquainted with editing Wikis, and I was wondering why, on the Did You Knows, people leave just their signature? —The preceding unsigned comment was added by Cubhicbu (talk • contribs).

Hey You-Know-Who; as you may or may not know, we recently passed a new image policy that requires all newly uploaded images to have sourcing and licensing information filled out using the {{Information}} template. The policy also restricts the use of images solely to be used in galleries, since galleries cannot be considered as a "fair use" of a copyrighted image. Your current uploads are in breach of the policy as they are not sourced or licensed (I will be correcting them so you can check the revision history and see what I added to the file page), and they are only present on your gallery. Can you please ensure that these images you have uploaded - and future images you planned to upload - are used in articles, as gallery-only images will be deleted in future. Thank you for your cooperation. - Cavalier One

Hey :) i Saw That Ur Page is Very Cool & That ur Into Ravenclaw ... i Can't Be Into Gryffindor & i Wanna Make My Page Almost like Urs Can u Help me :) ?? —The preceding unsigned comment was added by Its Alyson (talk • contribs).

How can I get one of those boxes that displays information?

There's been a rash of vandalism of your userpage recently, mostly by unregistered IP's, so I've given your userpage Semiprotected status to help stop this. If you want the prtection removed, let me know.

Also, another user uploaded a lower quality version of File:Ron Weasley in the Muggle street of London.JPG over yours, and due to a glitch we were unable to restore the 192 KB version (if you click on the 12/06/09 revision you can see the low-quality one, and you can see the event log of our attempts to fix it). Could you reupload it? - Nick O'Demus 10:20, October 27, 2010 (UTC)

Thanks for creating this image:

Please ensure that images you upload are used in articles. Under the image policy, "If an image is uploaded exclusively to be showcased in a gallery, it does not qualify as fair use". If images are not used in articles, they will be deleted in accordance with this part of the policy. Can you please go through your image uploads and ensure that they are used in a way which complies with the fair use provision of image use. Any gallery-only images will have to be deleted. Thank you for your cooperation. - Cavalier One

As I have previously stated, please ensure that any images you upload are used within articles to comply with the fair use provision of image use. Images uploaded with the intent of displaying them in a gallery only cannot be considered fair use. Please go through your uploads and add them to articles. Any gallery only images will be deleted in order to comply with policy. - Cavalier One

Or there's something wrong with my computer or User:You-Know-Who/photocollections is kind of messed up? I hope you can see it and clear it up ;) If you see the same as me!--Station7 08:06, November 15, 2010 (UTC)

The picture of the ring at Marvolo Gaunt's Ring.jpg has the licensing information This file has been released into the public domain by the copyright holder, its copyright has expired, or it is ineligible for copyright. This applies worldwide. This seems unlikely to be correct I am sure the image of the ring belongs to a publisher or movie company. I think you intended to label this photo as This is a screenshot of a copyrighted website, video game graphic, computer program graphic, television broadcast, or film. It is believed that screenshots may be exhibited on Harry Potter Wiki under the fair use provision of United States copyright law. See Copyrights. You can replace the "public domain" licensing information with the "copyright screenshot" information by clicking "Edit" on the picture page, and replacing the tag "{{PD}}" with "{{Screenshot}}". Keep up the good work. Nankai 04:13, December 15, 2010 (UTC)

Is there a way to change Houses on the House Points Game?

Hi Enrico, nice to see you around again! You're doing a really cool job uploading pics from Deathly Hallows. Would it be possible for you to upload some new images of the young Dumbledore and Grindelwald? The ones that are on Grindelwald's page at the moment, as well as the photograph from Bathilda Bagshot's house. If so that would be awesome.:) Jayden Matthews 21:05, April 6, 2011 (UTC)

Enrico, thank you so much! I've been trying to find decent quality versions of these images for months and months. Finally! Jayden Matthews 21:29, April 7, 2011 (UTC)

Yeah, me too! I cropped and rotated the Grindelwald image you uploaded so that he is the sole focus without the rest of the book being there. You can see it on Grindelwald's article. Jayden Matthews 13:38, April 8, 2011 (UTC)

You have been asked previously to ensure that your image uploads are placed in articles, and not solely on your gallery page to comply with our image policy. You now have one week (until 20th April, 2011) to go through your image uploads and apply them to articles. After this time, I will go through them one by one, and either use them or delete them. Thank you for your cooperation. - Cavalier One

Am very sorry Cavalier One for not responding to you previously for i haven't enough time to check even my Talk page. I just uploaded the photos in thinking that those will serve as big help to other users and to the wiki entirely. As now that i am aware, i'll make sure that my uploaded photos are gonna be use in the corresponding articles. Thank you for your concern. --ÈnŔîčö DC

Re: He doesn't look like Jamie Campbell Bower who played the character, He has much closer look to Toby Regbo. --ÈnŔîčö DC

When you look at the following photo you can see at the left side Toby Regbo as young Albus Dumbledore. He is the smaller one. 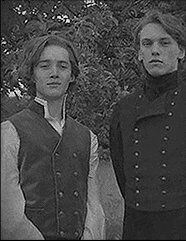 Hi Enrico. Can I ask a favour? Your photos are a much better quality than anything I've ever been able to upload. Would you be able to upload a new version of this image? We're currently having a discussion on Grindelwald's talk page to decide a new main image for him, and it would be really helpfull. Thanks:) Jayden Matthews 11:28, April 19, 2011 (UTC)

Voting is in progress for new infobox pics for Gellert Grindelwald and Fleur Delacour. There's only a couple days left before they both close, so be sure to weigh in for your favorite.

We're also WAY behind on some of our featured content, especially the QOTW's and DYK's, so if you've got a couple of minutes, drop in and voice your opinions on any you like or dislike, and maybe we can get some of the backlog cleared out.

Thank you very much for letting me know. ÈnŔîčö DC

May you change the photo on Jon Campling page (death eater)

I just want to ask, how can you change the photo of Jon Campling. He doesn't like the one up now. And wants you to change it. To a more recent one, from his website http://www.joncampling.com maybe put a photo of him with his long beard and hair, he said this. (hes a death eater in deathly hallows part 1 & 2. he stopped the hogwarts express on deathly hallows part 1.

thank you for your time.

When you've got a moment, please take a look at the following discussions:

Hi iknow this is sudden but can u help me?

Its a remake of Code Monkey, Harry Potter.

Hey, theres this picture you uploaded from HP and the Deathly Hallows (http://harrypotter.wikia.com/wiki/File:01_Lupin_Nymphadora_Dh.jpg) and I wanna know where in the movie (probably the first part) it is. Cheers!

Hiya! Really Cool Profile.I Was Just Wondering How You Were Able To Put Up Those Support Signs And How You Support Them.(For Example,Spew and Ravenclaw.)

Hi!Really cool page!Just wanted to ask how you did that thing on your profile that you can add a picture of you,your wand,magical charactaristics and those stuff?Thanks!Oh,and sorry for the bother-I'm new here!

Retrieved from "https://harrypotter.fandom.com/wiki/User_talk:You-Know-Who?oldid=978357"
*Disclosure: Some of the links above are affiliate links, meaning, at no additional cost to you, Fandom will earn a commission if you click through and make a purchase. Community content is available under CC-BY-SA unless otherwise noted.
FandomShop Newsletter Join Fan Lab