Harry Potter Wiki
Register
Don't have an account?
Sign In
Advertisement
in: Creatures from the United States of America, House mascots, Legilimency,
and 2 more
English

View source
watch 02:24
Wiki Targeted (Entertainment)
Do you like this video?
Play Sound

"A fast and powerful cat native to Appalachia"
— Description[src]

The Wampus cat was a magical cat native to the United States.[2] It was one of the four house symbols of Ilvermorny School of Witchcraft and Wizardry.[3] 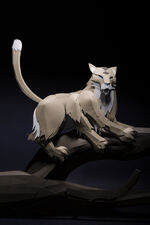 Somewhat resembling the mundane mountain lion or cougar in size and appearance, the Wampus Cat was native to the Appalachian Mountains. It could walk on its hind legs, outrun arrows, and its yellow eyes were reputed to have the power of both hypnosis and Legilimency.[1] The Wampus cat was fast, strong, and almost impossible to kill.[3]

The Cherokee had most extensively studied the Wampus Cat, with whom they shared their native region, and only they had ever succeeded in procuring Wampus cat hair for use as a wand core.[1]

The tears of Wampus cats had strong degenerative properties, which could cause its drinker to rapidly lose their memory.[4]

Isolt and the Pukwudgie William took trips to observe these creatures and watched newborn Wampus kittens playing. One of the four houses of Ilvermorny School of Witchcraft and Wizardry, founded in the 17th century, was named after the Wampus cat.[3] This name of the house was decided by Webster Boot. Isolt Sayre and James Steward also used the hair for some of their wands.

In 1832, wizard Abel Treetops of Cincinnati claimed to have patented a method of taming Wampus Cats for use as guards over wizarding houses. Treetops was exposed as a fraud when MACUSA raided his home and found him putting Engorgement Charms on Kneazles.[1]

The famous wandmaker Johannes Jonker used the hair of this species as a wand core in the early 20th century.[2]

During the 1990–1991 school year, a rogue Wampus cat attacked and injured both Dolores Umbridge and Ismelda Murk in Hogsmeade. Because the creature hypnotised them both, they could only remember seeing its yellow eyes, leaving them to believe it was a werewolf. Jacob's sibling investigated the case with the Beast Division.[5] Jacob's sibling later located the loose beast at Hogsmeade station, and managed to subdue the beast.[6] It was brought back to Hogwarts School of Witchcraft and Wizardry, and was later observed by the Care of Magical Creatures Professor Silvanus Kettleburn and the Groundskeeper Rubeus Hagrid, along with some students.[7]

The Harry Potter Wiki has 6 images related to Wampus cat.