Most witches and wizards from the age of eleven that have not had their wand broken for any given reason.

"The wand chooses the wizard... it's not always clear why."
—Ollivander[src]

A wand is a tool used by wizards and witches to channel magical powers. Most spells are done with the aid of wands. It is possible to do magic without a wand, but is very difficult and requires much concentration and skill. Only advanced wizards can perform spells without the use of wands.[1] Wands are "quasi-sentient," and as close to animate as an object can get because they are imbued with a great deal of magic.[2]

Wandlore is a specific class of magic that refers to the history and magical properties of wands. Mr. Ollivander claims that it is a "complex and mysterious branch of magic."[3] The idea that a wand chooses the wizard is a part of wandlore, as is the idea that wands can switch allegiance.

Generally, wands are long, thin rods of wood with a magical substance embedded into their core. Some of the woods used include holly, hawthorn, oak, vine, rosewood, blackthorn, willow, ash, mahogany, yew, and elder. The cores that have been documented are Phoenix feather, Dragon heartstring, Veela hair, Unicorn hair, and Thestral hair. The wandmaker Ollivander mentioned that he did not use Veela hair, as it made for "temperamental" wands. It is possible that other magical substances may be used for cores, but none have yet been specified.

Other important characteristics of a wand are its length and its rigidity, ranging from "unyielding" to "springy." These factors have some effect on the overall use of the wand, but it is currently unknown what they actually do. The characteristics of a wand also seem to have some influence over which kinds of magic the wand is particularly suited for. For example, James Potter's wand was quite good at Transfiguration, and Lily Evans' wand was described as being excellent for Charms work.

The exact process of making a wand is not known. Likely, it is as difficult and complex as wandlore itself.

In almost all documented cases, the wand chooses the wizard. This is due to the unique character of each wand, which must match that of the wizard, as the wizard may not be able to perform magic if his and his wand's characters conflict, or the magic may be sub-par to magic performed with the wizard's own wand.[3] When trying out different wands, an aspiring wizard may cause some damage when he encounters wands that don't get along with him.[4] Unfortunately, such trial and error is the only way to find a wand that matches the witch or wizard, and so Mr. Ollivander has become used to his store becoming damaged on a constant basis.

It is theorised that the wand's length is directly proportional to the wizard's height: the longer the wand, the taller the wizard, and the shorter the wand, the shorter the wizard. However, this theory has not been confirmed. Examples of this have been found, as in Dolores Umbridge's short wand, and Ron Weasley's and Rubeus Hagrid's long ones. If this is the case it may only be proportionate to the user's height at the time the wand is purchased, as Draco Malfoy's wand was shorter than Harry's but Draco ended up taller then Harry.

Since numbers have known magical properties, it's also possible that the wand's length have some symbolic meaning related to their owners, much like their core. For example, the wand of Tom Riddle, a reputed dark wizard, measures 13½ inches and thirteen is commonly an omen of misforutne or evil in the folklore and religion of various cultures around the world.

Examples of damage caused by "mismatched" wands were seen in 1991, where wand boxes flew off of shelves and banged into walls and when a glass jar on a shelf was shattered as a result of Harry Potter waving the wrong sort of wands. He tried out many wands before he found the one that chose him. Apparently, a warm feeling is felt when the wizard or witch chooses the right wand, and the wand sometimes emits a few sparks or does some similar small sign of magic.[4]

Wands are capable of changing masters. When a wand's master is disarmed, stunned, or killed, but not had their wand snatched from their hand, the wand will accept the old master's attacker as its new master. This will occur even if the wand in question is not in the possession of either of the two people involved.[3] However, most wands share an affinity with their masters and will not easily discontinue its allegiance with the previous master; furthermore, wands forcibly taken in circumstances of purely competitive or friendly nature, or are stolen without attacking the previous master will not change allegiance.[5]

Wands can be broken by spells or by physical damage. Wands in this condition will have greatly reduced magical abilities. Even when repaired, the wand's magic will not improve and the wand may break again while performing magic. The Elder Wand is able to completely repair broken wands, although this ability may be lost if the current master (Harry Potter) dies undefeated, as most of the wand's power would disappear with him.[3]

Wands are quasi-sentient, meaning that while they cannot think or communicate like a human, they can perform certain actions through their own will. This could be how they choose their wizard, and also explains how Harry's wand was able to act on its own against Voldemort.[3] Wands sometimes show hints of their personality, such as shyness (reluctance to get out of their box before being purchased).[6]

Non-human beings, such as goblins and house-elves, are prohibited from owning or using wands. For goblins in particular, this has been a point of contention with the wizarding community, and has been the cause of some outbreaks of violence. It is unknown if any formal prohibiton exists against muggles possessing a wand, as they would be unable to use them anyway, although it could be considered a breach of the International Statute of Wizarding Secrecy.

During the last year of the Second Wizarding War, the British Ministry of Magic was overthrown by the Death Eaters, and new laws were put into effect. Muggle-born witches and wizards were regarded as having "stolen" their magic from "real" witches and wizards, and their wands were confiscated. Those who were not imprisoned were usually left destitute.

There are many makers of wands, but the best known, and most experienced in Britain is Ollivander's. The wandmaking establishment has been making wands since 382 BC and is located in Diagon Alley, London. Mr. Ollivander went missing in the summer of 1996[1], until he was discovered by Harry, Ron and Hermione and rescued by the house-elf Dobby in 1998. He had been kidnapped by Death Eaters on Voldemort's orders. After their rescue, Ollivander provided Harry with information about the Elder Wand and about how a wand passes ownership.

There were more British wandmakers, such as Jimmy Kiddell, but their wands were not as good as Ollivander's.

According to legend, Death created the Elder Wand, the most powerful wand in existence, from the branch of an elder tree. Albus Dumbledore, however, believed it was more likely that the wand had been created by Antioch Peverell himself. 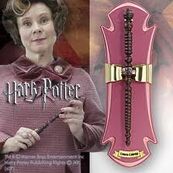 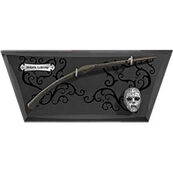 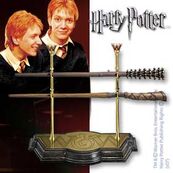 Fred and George Weasley's wands
Add a photo to this gallery

Retrieved from "https://harrypotter.fandom.com/wiki/Wand?oldid=399173"
*Disclosure: Some of the links above are affiliate links, meaning, at no additional cost to you, Fandom will earn a commission if you click through and make a purchase. Community content is available under CC-BY-SA unless otherwise noted.