This article is about the species in general. You may be looking for the specific one at Hogwarts School of Witchcraft and Wizardry.

"Ron gasped, staring through the windshield, and Harry looked around just in time to see a branch as thick as a python smash into it. The tree they had hit was attacking them. Its trunk was bent almost double, and its gnarled boughs were pummeling every inch of the car it could reach."
—Ron Weasley and Harry Potter having crashed the Flying Ford Anglia into the Hogwarts Whomping Willow[src]

Whomping Willows would attack anyone and anything that came within range of its branches.[1] A deciduous plant, its limbs functioned as arms,[1] and any damage to them must be treated in much the same way.[4]

The most famous Whomping Willow is the one planted on the grounds of Hogwarts School of Witchcraft and Wizardry.[1] The Whomping Willow was planted around the year 1971 to cover up the opening of a secret passage leading from the Hogwarts grounds to the Shrieking Shack in the village of Hogsmeade.[5]

It had a small knot near the base. Pressing the knot caused the tree to become immobilised.[6] This allowed Remus Lupin to travel unnoticed to and from the Shrieking Shack, where he was able to undergo his transformation into a werewolf in privacy. To access the tunnel, Lupin's friend Peter Pettigrew would transform into his rat animagus form, becoming small enough to easily avoid the willow's branches and press the knot.[7]

The willow's movements afterwards prevented Lupin from leaving while in his feral state.[7]

Students would challenge each other to get as close as possible to the tree's trunk until the tree nearly took the eye of student Davey Gudgeon.[5]

During the 1989–1990 school year at Hogwarts, Professor Pomona Sprout taught her sixth year Herbology students about how to care for young Whomping Willows.[3] 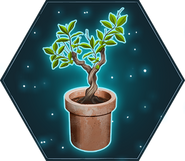 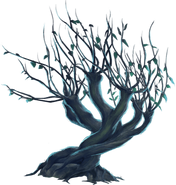 A Whomping Willow
Add a photo to this gallery

The Harry Potter Wiki has 56 images related to Whomping Willow.

Retrieved from "https://harrypotter.fandom.com/wiki/Whomping_Willow?oldid=1396757"
*Disclosure: Some of the links above are affiliate links, meaning, at no additional cost to you, Fandom will earn a commission if you click through and make a purchase. Community content is available under CC-BY-SA unless otherwise noted.