Hermione: "These birds... they can't be here just for decoration."
Harry: "They're not birds! They're keys! Winged keys."
— Hermione Granger and Harry Potter when they entered the chamber of winged keys[src]

The Winged Keys,[2] also known as Flying Keys,[3] were keys that were enchanted with the Flying charm by Professor Filius Flitwick to guard the Philosopher's Stone.[1]

The keys were placed in a massive "flock" within the third of the Stone's Chambers, and only one of them would allow entry into the fourth chamber through a locked door that was made impervious to Unlocking Charms. The chamber also contained brooms, which could be used to retrieve the correct key, though the keys would scatter chaotically as soon as the brooms were used to lift-off.[1]

In 1992, Harry Potter, Ron Weasley, and Hermione Granger had to overcome a series of obstacles in order to pass from one Chamber to follow Severus Snape (actually Quirinus Quirrell), whom they believed intended to hand the Stone over to Lord Voldemort, and prevent him from successfully acquiring the stone.[1]

The third of the Underground Chambers was filled with the winged keys, which at first appeared to be birds. As they soon discovered the locked door at the end of the room was impervious to the Unlocking Charm (Alohomora), they also realised the keys were not, in fact, birds.[1]

Hermione cleverly deduced that the key that would open the locked door must be an old one to match the old lock on the door, and the only old key was one with a broken wing, as it had just been used by Quirinus Quirrell. As soon as Harry, Ron and Hermione took off on brooms to catch the "old key," the rest of the keys started zooming and darting all over the place. The winged key that was able to open the locked door was described as an old-fashioned silver key with bright blue wings.[1]

Mary GrandPré's illustration of the Chamber of Winged Keys

An illustration of a Winged Key by Clare Melinsky

Concept artwork for the Winged Keys 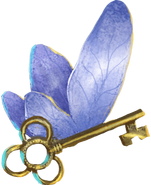 A Flying Key as seen in Harry Potter: Wizards Unite 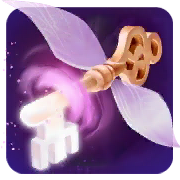 An Accio Flying Key as seen in Harry Potter: Puzzles & Spells
Add a photo to this gallery

Retrieved from "https://harrypotter.fandom.com/wiki/Winged_Keys?oldid=1396401"
*Disclosure: Some of the links above are affiliate links, meaning, at no additional cost to you, Fandom will earn a commission if you click through and make a purchase. Community content is available under CC-BY-SA unless otherwise noted.