Women's interests, such as quizzes, celebrity news, and cooking

Witch Weekly was a popular magazine for witches created by Tobias Misslethorpe.[1] It included articles, quizzes, advice columns, and recipes. It also reported a great deal of celebrity news, as Harry Potter and Quidditch players were featured often in it.

Molly Weasley was one subscriber; St Mungo's also kept it stocked in their waiting room.[2] It gave a regular Most Charming Smile award in association with the Witches' League (of which Lady Wimborne was president), which Gilderoy Lockhart had won five times by 1992.[3]

Near the start of the 1991–1992 school year, the magazine ran a "Celebration of Sorting!" edition with stories devoted to what to wear for sorting day and potions that might affect the Sorting Hat's decision.[4]

Witch Weekly had published several interviews by Rita Skeeter, including one written in 1995, "Harry Potter's Secret Heartache", which falsely accused Hermione Granger of leading on both Viktor Krum and Harry Potter by use of love potions to "satisfy her taste for celebrity wizards".[5] The article was widely read enough that Hermione received quite a bit of hate mail.[6]

Hermione was dismayed at Easter, when the Easter egg that Mrs Weasley sent to Harry was about the size of an ostrich egg, and Hermione's was the size of a chicken's egg. This misunderstanding was not cleared up until the Weasleys came to cheer Harry on in the Third Task. Harry told Mrs Weasley that Hermione was never his girlfriend.[7] 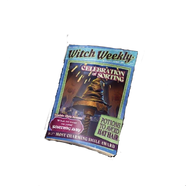 Deutsch Español Suomi Français עברית Italiano Nederlands Norsk Polski Português do Brasil Русский Українська 中文
*Disclosure: Some of the links above are affiliate links, meaning, at no additional cost to you, Fandom will earn a commission if you click through and make a purchase. Community content is available under CC-BY-SA unless otherwise noted.
Advertisement