Wizarding Money[1] is the currency used by the wizarding world, consisting of three different coins. In decreasing order of value, they are: Galleon, Sickle and Knut. They are gold, silver, and bronze, respectively. According to Rubeus Hagrid, there are 17 Sickles in a Galleon, and 29 Knuts in a Sickle, meaning there are 493 Knuts to a Galleon. Around the edge of each coin is a series of numerals which represent a serial number belonging to the Goblin that cast the coin.

Money in itself is thought to be one of the five exceptions to Gamp's Law of Elemental Transfiguration[citation needed], meaning it cannot be created from nothing. Aside from the Philosopher's Stone which can convert other metals into gold there seems to be no other method of obtaining it. Attempting to duplicate money with the Geminio spell is also ineffective, as duplicates created from Geminio are worthless.

The three denominations of wizarding currency were sometimes represented with the following set of symbols:[2]

Converted into other currencies

According to J. K. Rowling, the approximate value of a Galleon is "About five Great British pounds, though the exchange rate varies!".[3]

This is consistent with the "textbooks" Rowling wrote for charity (Fantastic Beasts and Where to Find Them and Quidditch Through the Ages), which states that GB£174 million/US$250 million is equivalent to 34 million Galleons[4] (or 34,000,872 Galleons, 14 Sickles, 7 Knuts to be exact[5]) and works out as approximately £5.12/$7.35 per Galleon, but does not match the wizarding prices printed on the backs of the books (£4.99 or 1 Galleon, 11 Sickles; and $3.99 or 14 Sickles, 3 Knuts for the original UK and US editions respectively).

With this information, we can calculate the value of wizarding currency in Muggle money.[6] The amounts below are approximate, and were accurate as of December 5, 2010, though it is unlikely that the value of a Galleon scales with US currency. As the gold standard values of wizarding currencies are unknown, it is difficult to estimate a present day conversion rate, and one would have to rely on Rowling's older approximations.

Note that the Galleon/Pound rate cited by Rowling is probably that offered by Gringotts and bears no relation to the precious-metal value of Wizarding coins. The "gold coins the size of hubcaps" mentioned in reference to the Quidditch World Cup would be much larger than the British five-pound Quintuple Sovereign today sold for its bullion value of hundreds of pounds sterling (though this hubcap reference may have been an exaggeration). However, it is unclear whether the coins were Galleons, or the currency of some other Wizard community. Certainly, if the coins were indeed of such size, there could have been no talking about "handfuls" of them.

It should be mentioned that Rowling's exchange rates between Galleons and Muggle currency are very far off from reality, assuming that Galleons are made from gold. At the time of this entry (July 15, 2014) one gram of gold is worth €42,00 or £24,59 and using regular sized coins as a comparison (one 20 €-cent coin weighs 5.74g for example, 10p weigh 6.50g) would allow for an exchange rate in excess of 100-1 instead of the 5-1 that is accepted as canon. There are possible explanations for this, the most logical ones being that a Galleon is not made from pure gold but rather has a gold core of 0.21 grams or less, or for that matter is only gold-coloured and not made of actual gold at all. Another reason, considering the sometimes mentioned logic of the wizarding world, is the way Galleons may possibly be created and equipped with safety measures such as charms that will not allow its owners to exchange them in the Muggle world outside official goblin establishments.

Furthermore, the value of the coins presented by Rowling at the end of Fantastic Beasts and Where to Find Them is extremely unlikely as this would make the overall currency rate of all the coins extremely low indeed. For example, in the fifth book, Harry, Ron and Hermione all buy a Butterbeer each; the price for the three is six Sickles - so two Sickles each. Going by the currency approximations this would make a beer cost about 60p - British currency - which is of course ridiculously low (unless perhaps the Butterbeer is a sort of cheap non-alcoholic drink like soda pop, which would be plausible as it is regularly drunk by minors). Moreover, in the second book Molly Weasley is described to only take "one gold galleon" from her vault at Gringotts which is not much at all. Of course, it is common knowledge that the Weasleys are poor but they have never been described as starving and have always been able to buy the equipment they need with the little money they have, even if it is second hand. However, many people would just assume that everything was much cheaper in the Wizarding world as they don't need to spend money on manufacturing but most of it does seem slightly ridiculous. A more appropriate value of the Galleon would be around £24.60 as this would be a rate that would fit with Britains present climate.

Galleons were Spanish treasure ships often raided by pirates. "Sickle" is the ancient Greek term for the shekel, the currency of Judea, as rendered by William Tyndale in his translation of the Greek New Testament, (later the King James Bible). Also translated as silverling. "Knut" or "Canute" is the name of an 11th-century King of England.

"Unum Galleon" written on the coins literally means "One Galleon". "Unum" may be used as Latin for "One". 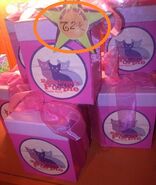 Use of Fleam-like symbol example 1.

Use of fleam-like symbol example 2.
Add a photo to this gallery

Retrieved from "https://harrypotter.fandom.com/wiki/Wizarding_currency?oldid=879002"
*Disclosure: Some of the links above are affiliate links, meaning, at no additional cost to you, Fandom will earn a commission if you click through and make a purchase. Community content is available under CC-BY-SA unless otherwise noted.