Extant
Wormwood (Artemisa absinthium[1]) is a very bitter herb, that has used in potion-making since ancient times.[2]

An Infusion of Wormwood was used in the concoction of the Draught of Living Death, Elixir to Induce Euphoria, and the Shrinking Solution.[3] Wormwood Essence was also made from this plant.[4] Harry Potter learned about this ingredient in his first Potion class in September 1991, where Professor Snape "pointed it out for him".[5] Wormwood was also an ingredient of the Healing Potion, which was brewed and used heavily by volunteer members of the Statute of Secrecy Task Force in the 2010s to help address the Calamity.[6]

Muggles use wormwood leaves for many things, including medicine and as a way to discourage fleas.[1] Wormwood's scientific name is derived from that of Artemis, the goddess of the hunt in Greek mythology.[1] Wormwood oil can be poisonous in large amounts.[1] 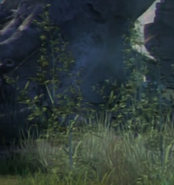 A field of Wormwood 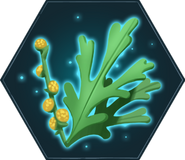 A strand of Wormwood